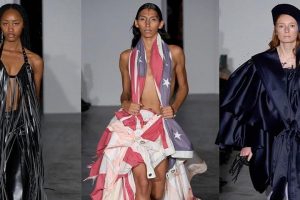 Founded in 2013 by a foursome of friends in NYC, womenswear label Vaquera has since evolved into a duo led by Patric DiCaprio and Bryn Taubensee. The designers describe their aesthetic as “fashion fan-fiction” and partnered with Dover Street Market in 2020, which has lent a helping hand in craftsmanship and distribution.

For Fall/Winter 2022, Vaquera made its Paris Fashion Week debut and presented a romantic affair emblazoned with whimsical motifs alongside its very own collaboration with Vans. Now, the brand returns to the PFW agenda to showcase its SS23 collection. Models stormed the halls of DSM’s Parisian grounds with an androgynous perspective in mind.

At the same time, the duo celebrated their home turf through a rebellious American flag dress made with looted flags taken by friends from the South Shore of Long Island. The previous echoed a similar ensemble seen in its debut, delivered alongside a distressed wedding dress set atop gashed pink tights that formerly belonged to DiCaprio’s mother.

Vaquera SS23 presented the brand as we know and love it. Although they wish to gear toward a more commercial route, the collection saw DiCaprio and Taubensee at their finest while staying true to their restless design energy.