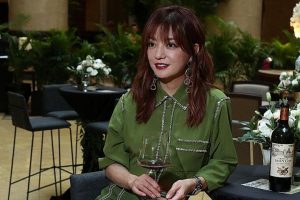 Chinese actress Vicki Zhao is battling rumours of a divorce after it was discovered that she had deleted all posts related to her husband on her Instagram account.

Zhao, 44, best known for her portrayal of Little Swallow in the period drama series My Fair Princess (1998 to 1999), has been married to entrepreneur Huang Youlong, a Singapore citizen, since 2008.

The couple have a daughter born in Singapore, aged 10, and nicknamed “Little April”.

According to Taiwanese news reports, netizens found that Zhao had recently deleted posts on Instagram related to her husband, including a photo of him holding their daughter’s hand and roses that he had given her for Valentine’s Day last year.

That led to speculation that their marriage was on the rocks, but Zhao’s team has shut down the rumours.

In a post on Chinese microblogging site Weibo, her management posted in Chinese last Saturday night: “Chasing the wind and clutching at shadows is so tiring. Gossip cautiously. Work hard.”

“Chasing the wind and clutching at shadows” is the literal translation of a Chinese idiom which is commonly used to refer to groundless rumours.

The post did not say why the photos were deleted.

The couple have been dogged by negative press in recent years.

In 2016, media company Tibet Longwei, reportedly controlled by Zhao and Mr Huang, launched a failed takeover bid of another company. The bid attracted the scrutiny of the China Securities Regulatory Commission due to irregularities.

Zhao and Mr Huang were subsequently barred from trading in the mainland stock market for five years and from taking on key positions at listed companies for five years.

Still, the couple remain a force to be reckoned with.

The Business Times reported in May that Mr Huang bought a penthouse at freehold Ardmore Park condominium, located in one of Singapore’s most exclusive districts, for $27.65 million.

He also owns at least one other unit in the development, a four-bedroom apartment on a low floor in another block.