Home » Entertainment » Visa Enters the NFT Game by Purchasing a CryptoPunk for $150,000 USD

Visa Enters the NFT Game by Purchasing a CryptoPunk for $150,000 USD 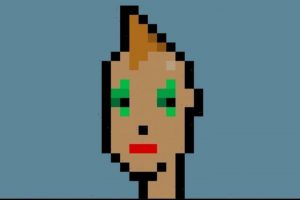 Visa has entered the NFT game with a recent acquisition of a CryptoPunk called “7610” for 49.5 ETH or $150,000 USD. The NFT features a female punk rocking a blonde mohawk, red lipstick and green eyeshadow. Interestingly, the NFT is one of the many original avatars that were offered for free back in 2017 to anyone with an Ethereum wallet.

The head of the financial services firm’s crypto sector, Cuy Sheffield, states that the purchase was to show that Visa is not afraid to join in on this emerging part of the art market. In an interview with Artnet News, Sheffield wrote: “Our excitement about this project is less about any individual Punk, and more about the CryptoPunk collection as a whole and what it represents—the beginnings of a new chapter for digital commerce. This is just the beginning. We’re eager to continue building our NFT collection and to support the diverse group of artists and creators working in this space.”

CryptoPunks are no neighbor to mainstream success, as the NFTs have already been publicly auctioned through the likes of Christie’s and Sotheby’s. However, Visa’s entrance into the game is certainly no light matter. The crypto news site, CoinDesk reported that hours after the Visa’s acquisition of “7610,” nearly 300 CryptoPunks were purchased.

That being said, the NFT market is still young and growing in ways that are hard to predict. In order for the NFT market to become mainstream, according to Sheffield, “NFTs should be as easy to purchase as traditional e-commerce experiences where consumers can leverage their existing Visa cards at the checkout instead of having to purchase a cryptocurrency first to buy their NFT.”

In other NFT news, it has been revealed that the Fame Lady Squad NFT project was not founded by women at all.
Source: Read Full Article