Home » Entertainment » Want a Break in the 3-Hour ‘Avengers’ Movie? You’ll Need a Passport or a Time Machine

Want a Break in the 3-Hour ‘Avengers’ Movie? You’ll Need a Passport or a Time Machine

At a multiplex in Jerusalem, midway through the three-hour epic “Avengers: Endgame,” the hammer-wielding superhero Thor was gracing the screen when the picture suddenly stopped.

Thor’s golden locks cut out, the Hebrew word for “pause” appeared and audience members began to rise from their seats. About 10 minutes later, the superheros resumed their battle against the villain Thanos.

Theater just paused Endgame halfway through for intermission. What the ??? pic.twitter.com/7ugUBmVdg9

The finale of the Avengers saga, which began showing across the United States on Thursday, is expected to make box-office history, with experts predicting that the film will gross more than $300 million in its opening weekend. Another big number associated with the film is its run time: Clocking in at 181 minutes, “Endgame” is the longest Marvel Studios movie to date.

It has been decades since American movie theaters regularly had intermissions. But when word of the film’s length got out earlier this year, it prompted online pleas from some fans for a break in the action. The filmmakers shot the idea down, and American theater chains have publicly responded to tweets from moviegoers to make clear that, no, there will be no built-in moment to buy or dispose of their Coca-Colas.

“We’re telling everyone to prep as if they’re going into surgery,” joked Joe Russo, one of the directors, in an interview with ComicBook.com. “Don’t have any water or anything to drink post-midnight the day before you see the film, and you’ll be fine.”

So in the United States, most audiences will have to steel themselves for three uninterrupted hours. But theaters across the world have taken control of the remote and hit pause roughly halfway through. Avengers fans in countries including Egypt, Italy, Portugal, Switzerland and Turkey all reported having an intermission during showings this week.

Intermissions were once a regular part of the American moviegoing experience, even with films that were not “Gone With The Wind”-sized (three hours, 58 minutes) epics. The reason was partly practical: Theaters needed time to swap out film reels.

Jonathan Kuntz, a film historian who teaches at the University of California, Los Angeles, remembered seeing “Lawrence of Arabia” in 1962 and going to his car during intermission, thinking the movie was over (it ran to a whopping three hours, 48 minutes). 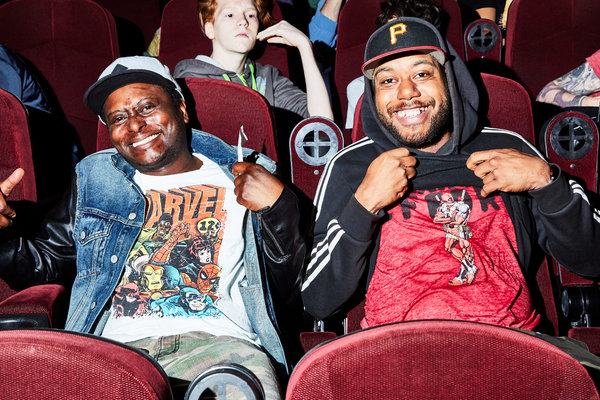 In recent decades, intermissions in the United States have been rare. “Gandhi” in 1982 (three hours, 11 minutes) had a break in one version of the film, as did “The Hateful Eight,” the 2015 Western by Quentin Tarantino, which was about as long as “Endgame.” But filmmakers today are not accustomed to building pauses into the screenplay, and the tradition has largely disappeared.

One independent movie theater outside Baltimore, a drive-in called Bengies, has taken matters into its own hands by adding an intermission to their Sunday screening of “Endgame” to accommodate the “unusually long run time of this movie,” according to its website. The theater did not respond to requests for comment.

But in the rest of the country, facing the possibility of needing to leave the theater and missing key plot points, moviegoers prepared themselves for a battle of their own.

Lined up to enter Williamsburg Cinemas in Brooklyn for a Thursday evening showing, some fans said they had deprived themselves of liquids for most of the day to avoid even a brief departure from the theater.

Standing toward the back of the line in the cold April drizzle, Kevin Myvett, 28, said he had spent much of the last week preparing for “Endgame” by exercising self-control and watching older Marvel films back-to-back without letting himself take a break.

“I was really trying to prepare myself mentally for this,” he said.

Fans and websites circulated tips on which moments were opportune for quick getaways. At an AMC theater in Inver Grove Heights, Minn., a suburb of St. Paul, Dylan Novacek, 23, darted from his seat during a scene that fans online said was not particularly consequential. He was back in about a minute. “I didn’t even know how he made it to the bathroom so fast,” his girlfriend, Kayla Erickson, said.

The American movie industry is unlikely to embrace intermissions again, despite all the snacks viewers might buy during a pause. And adding in an intermission for a movie like “Endgame” would only further complicate the scheduling headache that comes with showing a wildly popular three-hour (not including trailers) film.

A longer movie, paired with extra time after the show needed to clean the theater, would typically mean fewer showtimes, and thus fewer ticket sales, said Jeff Bock, a senior analyst at Exhibitor Relations, an entertainment research firm. Instead, some theaters are simply opening earlier and closing later — or not at all — to screen “Endgame” as many times as possible.

In the United States, 29 AMC theaters were showing “Endgame” around the clock from Thursday to Friday. An additional 17 were open for 72 hours straight.

“The fan base is so rabid that they can eke out a lot of money with these multiple showings,” Mr. Bock said.

Marvel movies, in particular, have trained fans to stay in their seats for as long as possible. Most Marvel films include scenes after the credits that give clues about future films, and the credits themselves can be quite long (about 10 minutes for “Endgame”) because of all the visual effects involved. Given that “Endgame” is meant to conclude the Avengers saga, the existence or lack of a post-credits scene has been the subject of much online discussion.

Still, many Marvel fans are remaining in their seats to the very end, and most of those interviewed after they saw the movie on Thursday said they did not mind that they didn’t have a chance to get up sooner.

At an AMC in Phoenix, Matt Hoskins, 40, said the Marvel fandom was so strong that the length simply did not matter to most of them. Plus, adding an intermission — with its air of 20th-century nostalgia — wouldn’t fit well in a mainstream 21st-century film about superheroes, he said.