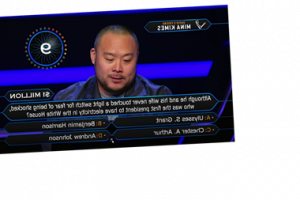 You could call it unpresidented.

As host Jimmy Kimmel said on Sunday night, no celebrity in two decades of “Who Wants To Be A Millionaire” had ever won the $1 million prize for charity. That’s now changed, thanks to “Ugly Delicious” chef and restaurateur David Chang, but it didn’t come easy.

Faced with a million-dollar question about which president first had electricity at the White House, Chang was stumped. The chef turned to his Phone a Friend lifeline, pal and ESPN analyst Mina Kimes, who said her heart was beating out of her chest. When Chang asked if she was mad he sprung the million-dollar question on her, Kimes joked she was just upset for presenting herself as an intelligent option.

After Chang read the question, Kimes said it was “probably” Benjamin Harrison before time ran out. Chang then had to decide what to do ― and he didn’t even know Harrison was a president.

See it happen below:

In the end, Chang decided a $1 million prize he could donate to the Southern Smoke Foundation, a crisis relief organization for the food and beverage industry, was too much of an opportunity to pass up. He gambled and won the million.

See Chang and Kimmel celebrate, and watch Kimes admit she was about to give an additional option as time ran out, in the clip below.

END_OF_DOCUMENT_TOKEN_TO_BE_REPLACED

END_OF_DOCUMENT_TOKEN_TO_BE_REPLACED
We and our partners use cookies on this site to improve our service, perform analytics, personalize advertising, measure advertising performance, and remember website preferences.Ok