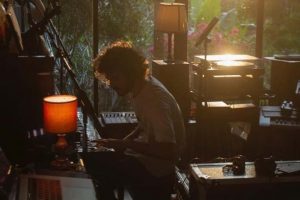 Inviting NPR to his beautiful home studio, FKJ, short for French Kiwi Juice, performs a dreamy one-man Tiny Desk Concert, offering viewers a look into the making of select songs from his new V I N C E N T album — namely “New Life” and “IHM.” Seamlessly transitioning from track to track whilst juggling sounds from the piano, saxophone, synths, drums, and guitars, he also throws in an improvised jam sesh as well as  fan-favorite songs “TUI” and “Ylang Ylang.”

In contrast with his performances at stunning locations such as La Fée Electricité, Paris and Salar de Uyuni in Bolivia for Cercle, the Tiny Desk Concert catches FKJ in his natural home environment after a long period of introspection, as he rediscovers the lost innocence and freedom in his life with his second album. As stated in his “In the The Making” video, this album is about “looking for a way out, of the adult mind.”

“Watching FKJ build a song is like watching him play a game of musical Tetris. One second he’s coaxing a rasping rhythm out of a drum set — the next, he’s clambering over instruments to get to the mic before the beat kicks in,” writes NPR.

For those that wish to catch him in person, FKJ will begin his tour through the U.S., Canada, and Mexico beginning in San Francisco on October 6. Tour dates can be found below.