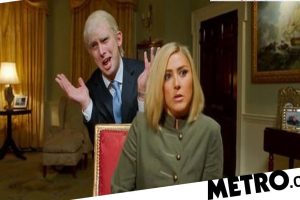 The first-look clips of the sure to be shocking Prince Andrew: The Musical have been released, and it of course pokes fun at his infamous Newsnight interview.

A satirical send-up of the life and times of the King’s disgraced younger brother, the one-hour special will focus on his key moments, relationships and controversies, including the disastrous Newsnight interview in 2019 when he told presenter Emily Maitlis he couldn’t sweat and about his visit to a Pizza Express in Woking.

Kieran Hodgson, who wrote the musical, stars as the Duke of York, while Emma Sidi plays Maitlis.

A clip of the recreation of Andrew’s train wreck interview was shown on Lorraine on Friday morning, and it sees him and the journalist break out into song, in a tune titled I Nailed It.

Asking Prince Andrew how he think their interview went, he raises his eyebrows confidently before jumping up from behind Emily’s chair and singing that he ‘nailed it’.

‘I did everything right,’ he added.

His interviewer then joins in as they sing that it was ‘unforgettable, unmissable’ and with ‘just a whiff of treason.’

The clip then cut to a newspaper man calling for commuters to come ‘read all about it’ as he hands out some tabloids.

Clearly caught off guard by what had unfolded, Lorraine host Ranvir Singh laughed before saying: ‘Oh my… I don’t know what to say about it.’

‘That looks absolutely incredible,’ she added.

However, people tuning in at home didn’t seem to see the funny side.

‘I know I’ll watch any old nonsense on the telly but Prince Andrew: The Musical is too much! Why! Why, oh why?! Who would want to watch that rubbish?,’ one person wrote on Twitter.

Another person said the show was ‘making light of a serious issue’.

Prince Andrew: The Musical airs on Thursday December 29 at 9pm on Channel 4.