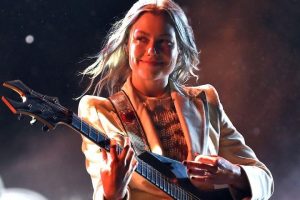 Phoebe Bridgers brought out a handful of her musicians friends while performing at a benefit concert called the Ally Coalition Talent Show organized by Jack Antonoff and his sister, fashion designer Rachel Antonoff. The benefit was the first in-person show since its last rendition in 2019, with benefits going towards improving the lives of LGBTQ+ youth.

Ally Coalition kept the lineup under wraps until the actual show, so fans were pleasantly surprised to see Bridgers leading the night. The singer delivered a stunning performance of “These Days,” a song that was written by Jackson Browne and has been recorded by several artists, most famously by German singer Nico.

For the cover, Bridgers brought out The 1975 frontman Matty Healy and Jack Antonoff himself, as well as Lucy Dacus, Weyes Blood and Trey Anastasio.

Later in the evening, Bridgers returned to perform a fan-favorite, Punisher cut “I Know the End,” backed by Antonoff, Dacus and Christian Lee Hutson.

Watch Phoebe Bridgers lead a performance of “These Days.”

In other music news, Pink Floyd has released 18 concerts from their The Dark Side of the Moon era.
Source: Read Full Article