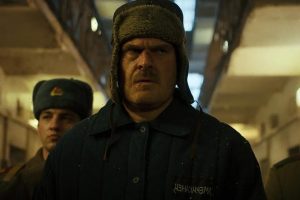 With just a few days to spare until its premiere, Netflix has released an explosive final trailer for Stranger Things Season 4 Vol. 1. The minute-long trailer introduces the kids’ Dungeons & Dragons team Hellfire Club, led by Dustin, who rolls a 20-sided die to decide their future. The group is also seen venturing into an ominous location of the Upside Down, filled with towering spikes and red storm clouds. Additional shots feature David Harbour‘s Jim Hopper seemingly staging a prison break from his confines in Russia.

Season 4 is broken up into two volumes and begins six months after the events of the Season 2 finale. Each episode of Vol.1 will be noticeably longer than usual with an average runtime of 75 minutes. In addition to the familiar faces, the penultimate season will feature a host of new characters including Robert Englund as Victor Creel, Jamie Campbell Bower as Peter Ballard, and Eduardo Franco as Argyle.

The seven-episode Stranger Things Season 4 Vol. 1 arrives this Friday, May 27 followed by a Vol. 2 release on July 1.