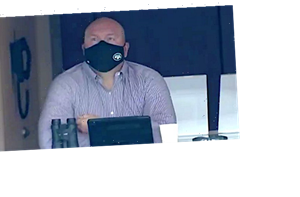 The New York Jets’ winless season is destroying the tone at the top.

Watch general manager Joe Douglas face-palm and close his eyes amid another hapless loss, this time to the Miami Dolphins.

The occasion was quarterback Joe Flacco getting sacked by host Miami in the 24-0 defeat, but there were plenty of other spirit-destroying moments that could have produced the same reaction.

The Jets (0-6) are now the only team without a victory and are a solid candidate to match the 0-16 ineptitude of the 2008 Detroit Lions and 2017 Cleveland Browns.

“It sucks,” head coach Adam Gase told the New York Post after the Miami game. “Everybody is just trying to do everything they can to win a game and just haven’t been able to do it.”

On the plus side, the more the Jets lose, the better chance they have of drafting coveted Clemson quarterback Trevor Lawrence.

Whether he would want to go there is another story.

Check out some reactions to Douglas:

END_OF_DOCUMENT_TOKEN_TO_BE_REPLACED

END_OF_DOCUMENT_TOKEN_TO_BE_REPLACED
We and our partners use cookies on this site to improve our service, perform analytics, personalize advertising, measure advertising performance, and remember website preferences.Ok