We Need to Talk About Colonialism, French-Algerian Artist Says

PARIS — Late one Sunday afternoon in February, the French-Algerian artist Kader Attia welcomed several dozen visitors to a talk in the skylighted foyer of La Colonie, a cultural center and cafe that he opened in 2016 in a former textile factory in Paris. Guests sitting on old sofas and folding chairs listened as Mr. Attia moderated a debate between two French philosophers on the politics of race in postcolonial times.

Colonialism and its aftermath are a frequent talking point at La Colonie, and they are a longstanding preoccupation of Mr. Attia, as his new exhibition “The Museum of Emotion,” running through May 6 at the Hayward Gallery in London, attests. The subject has become particularly timely with President Emmanuel Macron of France’s recent pledge to give back some of the 90,000 objects from sub-Saharan Africa that are in France’s national collections, mostly in the Quai Branly Museum in Paris. 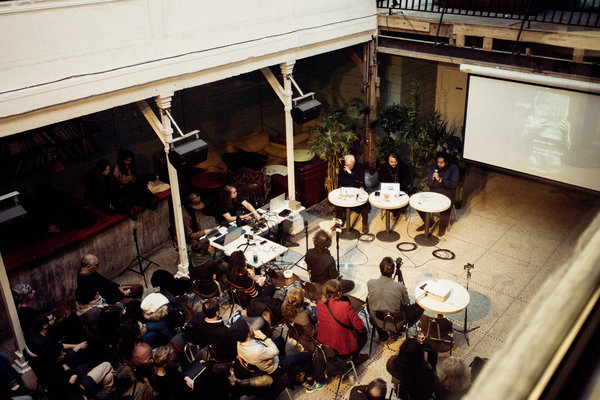 Through his installations, Mr. Attia (who won the Prix Marcel Duchamp, France’s most prestigious art award, in 2016) critiques Western museums’ approach to African heritage — their tendency to undervalue, misread and misrepresent its treasures, and to view it, still, through colonial eyes. In a room at the Hayward, for example, he shows an old-fashioned vitrine full of stuffed birds, and, mixed in with them, three bird-shaped African ritual masks. This, the artist is saying, is how African artifacts were long shown in Western natural history museums: alongside animal and plant specimens.

“What strikes me, and anyone else with origins that link them to these objects, is that when you visit Quai Branly, or the British Museum, or the Metropolitan Museum, you see objects that have been decontextualized,” he said in an interview at La Colonie.

“It’s as if you amputated a human being, showed his arm, and said: ‘Here is the human being,’ ” he added.

Elsewhere in the Hayward exhibition is a small shelf holding two objects: an Edvard Munch art book with “The Scream” on the cover and an African mask that bears an uncanny resemblance to the howling face.

The director of the Hayward Gallery, Ralph Rugoff, who curated the show, said that through this installation and other works, the artist was conveying a “sense of questioning of traditional museum values, where artifacts from the former colonies still can’t be taken seriously as great works of art somehow on the same level as the Western masters.”

Rather than dwelling on the need to give the objects back, Mr. Rugoff added, “It’s more like, ‘Let’s get rid of the concepts that make us take, and also reject, some of these artifacts, to put them in a hierarchy.’ ”

Mr. Attia, 48, grew up in the Paris suburb of Garges-lès-Gonesse, one of seven children of an Algerian construction worker father and an Algerian mother who was prevented from learning to read and write by the uncle who raised her.

The exhibition opens with a video, taken with a drone, of a suburban housing project — or “open-air jailhouse,” as the artist put it — like the one where he grew up alongside many other descendants of France’s former colonial subjects.

From his childhood through his teens, Mr. Kader spent months at a time in Algeria. Barely two decades had passed since the country’s liberation from French rule in 1962, so “there were still very strong traces of the war of independence,” he said. “You were basically living in a history book.”

Everywhere, he said, the architectural leftovers of colonialism were repurposed. A Modernist church, for example, was turned into a mosque. “These colonized people felt like they were taking back what belonged to them,” he said. “That’s when I developed a profound interest in the notion of reappropriation, and later, of repair.”

By the 1990s, Mr. Attia, then in his 20s, had earned degrees in applied arts and philosophy. He then spent nearly three years in the Republic of Congo doing alternative civilian service (a substitute for France’s compulsory military service). Part of a team preparing for the opening of the country’s first national museum, in the capital, Brazzaville, he came across objects that would be on show: masks, talismans, jewelry, shields. He became aware of the spiritual dimension of these objects, he said, of the belief that they had sacred or magical powers.

When he returned to France and went looking for African artifacts in museums, he found them displayed in a building that was the precursor to the Quai Branly. Important treasures that had been blessed by healers and sorcerers and used in rituals were, he said, “orphans here, because the bodies and communities that celebrated them were no longer around.”

At the same time, he started exploring his own French-Algerian and Muslim identity. In the early 2000s, he photographed transgender Algerian prostitutes who had fled civil war and persecution; images from that series are at the Hayward.

A few years later, he produced a series of works inspired by the Kaaba, the shrine in Mecca in whose direction Muslims turn when they pray. One of the paintings, “Black Cube II,” a work from 2005 that was exhibited in the British Museum’s “Hajj” show in 2012, shows the Kaaba as a quivering, dripping object.

Mr. Attia then started highlighting instances where North and sub-Saharan African culture had influenced Western culture without being fully acknowledged. In 2009, he produced “Untitled (Ghardaïa),” a scale model made of cooked couscous of the ancient Algerian city of Ghardaïa, whose geometric architecture influenced the architect Le Corbusier — a little-known fact. (“Untitled (Ghardaïa)” is owned by the Tate galleries in Britain.)

That same year, he denounced a multivenue exhibition in Paris, “Picasso and the Masters,” for leaving out the African masks that had so profoundly influenced the Spanish artist.

La Colonie, near the Gare du Nord in the French capital, is a forum where issues related to colonialism can be debated by intellectuals and academics, but also by ordinary citizens. (The space pays for itself by turning into a bar on weekends.)

Mr. Attia, who lives and works in Berlin and Paris, is no stranger to the debate about restitution. He organized a symposium on the subject at La Colonie in September, with speakers including Felwine Sarr, one of the two academics appointed by Mr. Macron to make recommendations on the subject. The report’s co-author, Bénédicte Savoy, said in an interview that Mr. Attia had “the ability, through a few gestures or objects, to give form to the philosophical questions of our time.”

Mr. Attia is currently working on a film with one of the descendants of a king whose throne was looted by French colonial forces and is now being given back by Mr. Macron to the state of Benin.

Mr. Attia said the fact that Mr. Macron was returning 26 treasures (including the throne) to Benin was a “strong gesture.”

“You need strong gestures to change the world,” he added.

But a previous wave of support for restitution in the 1970s was never followed up, he warned, and he called on artists and intellectuals “to fight to defend the question of restitution.”

“Artists have to embrace this issue so that it’s not just a matter for museums and researchers and politicians,” he said. “Art can stand up to politics.”