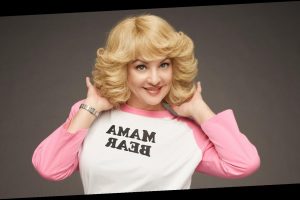 If Beverly Goldberg is a controlling, clingy mom now — imagine when she becomes a grandma. Well, that’s exactly what Wendi McLendon-Covey hopes for her Goldbergs matriarch when the ABC sitcom ends.

“I would love Bev to be holding a grandbaby,” the actress, 51, exclusively told Us Weekly. “I would also love to get to an era where she starts to wear leather pants because the real Beverly does dress that way in real life. She is alive and out there and dressing like a rock n’ roller in her 70s and she pulls it off.”

She added: “Let me say this — I know we can’t stay in the ‘80s forever, which is fine. But we are always going to be very vague with the date because that’s the device of the show. That it’s being told by memory. Details are spotty and the time jumps around. But if the network wants the show to go on and we have to go into the ‘90s, that’s fine.”

The Goldbergs, which debuted in September 2013, follows the lives of Beverly, her recliner-loving husband Murray (Jeff Garlin) and their kids Adam (Sean Giambrone), Barry (Troy Gentile) and Erica (Hayley Orrantia) in Jenkintown, Pennsylvania.

“Listen, I’ll do this as long as they want me to because it’s the best job I’ve had doing anything,” the Bridesmaids actress told Us. “I love every single person on our crew, everyone behind the scenes, everyone that’s a part of the cast, every guest star we have. It’s the biggest blessing. I can’t say that enough. Every time I go into work — even though the hours are long — it’s the most fun I could possibly have. So, I will do this and will probably have to be dragged kicking and screaming from the Sony lot on the final day.”

The nostalgia-filled comedy is currently in its eighth season. If it’s not renewed, McLendon-Covey wants it to be remembered as an “uplifting” series for viewers.

“I want it to be something that puts a smile on your face, that you can watch with your kids and not have to explain anything completely. Which is the feedback that I’ve gotten, which is great. I have a lot of parents DMing me saying, ‘Oh my God, we just love the show. We can just watch it and there is nothing inappropriate that we have to then pause.’ And it’s exhausting when you have to explain all kinds of weird things to your kids that maybe you weren’t planning on explaining at least for a couple more years,” she explained. “I want it to be a comfort show. When you’re in a bad mood or you’re sick or whatever, you can lie on the couch, watch The Goldbergs and know that I’m entertained, I feel good and I’m happy. That’s how I want it to be remembered.”

The Goldbergs airs on ABC Wednesdays at 8 p.m. ET.