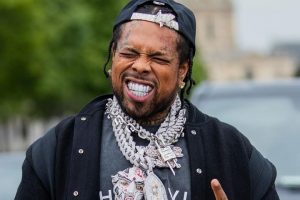 The Griselda titan shared the project’s October 28 release date to Hot 97’s Peter Rosenberg and confirmed that this will be the last installment in the long-running series that started in 2012. “It was supposed to have been Michelle first and you already know I have a notorious series called ‘Hitler Wears Hermes,’ which I started 10 years ago in 2012,” Gunn said. “Every year, at this time, I made ‘Part 1,’ ‘Part 2,’ ‘Part 3,’ ‘Part 4,’ all the way up to now, so it’s only right if I end it on 10.”

“The last one was going to be the final one, but I felt weird doing nine and not 10 of them,” he continued, referring to 2021’s Hitler Wears Hermes 8: Side B. “And you know, like in anything, you always celebrate the 10th year.” Gunn also added that he teamed up with a list of all-star producers and rappers for his final HWH album, such as RZA, Alchemist, Black Star, Run The Jewels, Swizz Beatz, Raekwon, DJ Drama and more.

As Hitler Wears Hermes 10 will serve as the finale in the series, the rapper also hinted at doing “a real limited, special 10-box” of a “crazy art piece” to commemorate the project.