What to See in New York Art Galleries Right Now

‘Dust Specks on the Sea’

You know how it usually goes when museums survey the contemporary art of non-Western regions; they focus on a few zones already on the radar of a multinational’s chief development officer, like “the Middle East” or “Latin America” or even the 4.5-billion-strong region of “Asia,” and flatten them into inconsequence. It’s much rarer to see shows with a real local focus on places beyond the executive suite’s gaze, like this small but very welcome exhibition of nearly two dozen artists from the Francophone Caribbean, at Hunter College’s outpost in East Harlem. The artists here come from Guadeloupe, Martinique and French Guiana — which, politically at least, are as much a part of France as Alaska and Hawaii are part of the United States — as well as from Haiti, the Caribbean’s lone French-speaking republic.

Some of the artists in “Dust Specks on the Sea: Contemporary Sculpture From the French Caribbean and Haiti” already have international careers, like the incisive, historically minded Mathieu K. Abonnenc, born in French Guiana, who here presents a wraithlike silver ring made from a melted-down heirloom, and Kenny Dunkan, born in Guadeloupe, whose row of dozens of metal fuel cans with long, flaccid spouts acerbically alludes to stereotypes of black male anatomy. A small, beguiling sculpture by Gaëlle Choisne, consisting of a bronze cast of an oyster shell suspended like some magic charm, is paired with a new recording of a sonata by Carmen Brouard, a Haitian-born modernist composer. Well over half the artists, though, were new to me; their art ranges from the soporifically one-note (bananas hanging from a chandelier, nations’ flags knotted together, a boat with black hands rising from the hull) to the freer and more poetic, as in a free-standing painting with collaged photographs by Louisa Marajo.

Much of the art here, for better and for worse, would not be out of place in a Lower East Side gallery or an art fair booth in Basel or Miami. But that is the point: as the great Martinican philosopher Édouard Glissant insisted, no artistic identity is absolute and no region is off the map. JASON FARAGO 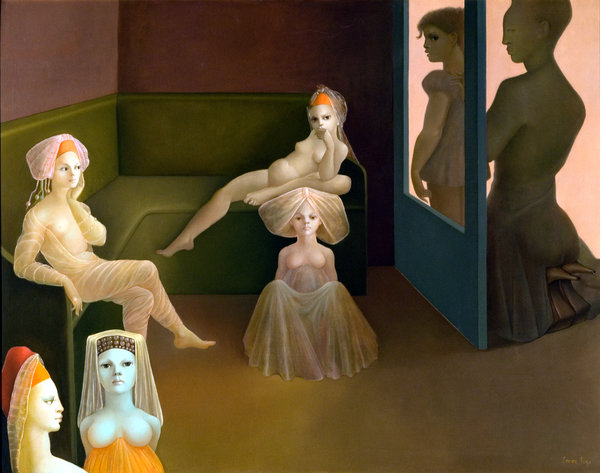 Across town from the grand Frida Kahlo exhibition at the Brooklyn Museum is a show devoted to another brilliant woman painter who was also associated with Surrealism: “Leonor Fini: Theater of Desire, 1930-1990” at the Museum of Sex. But if Ms. Kahlo’s flamboyant image and paintings have been peddled on T-shirts and tote bags, this fate seems less likely for the Italian-born Ms. Fini, who championed non-conformism in multiple forms, including androgyny and homosexuality.

Among the images here are a saintly 1950 oil-on-canvas portrait by Ms. Fini of her friend Jean Genet, the convicted thief turned author and gay icon, as well as 1947 illustrations for Mr. Genet’s “The Galley,” an epic poem about life on a ship headed to a French penal colony. There are illustrations for a 1970 edition of “Satyricon,” the fifth century A.D. poem about a retired Roman gladiator and his 16-year-old male lover, and photographs and videos documenting Ms. Fini’s escapades in Paris and Corsica, outfitted in florid masks and costumes of her own design.

Given that Surrealism was outré for its era, Ms. Fini’s critique of that movement is notable — but perfectly on point. Her forward-looking methods are evident in her paintings, which look amazingly post-internet and post-gender, and in her life-as-performance approach, captured in films and photographs. Similarly, her appearance at the private Museum of Sex, which often gets left off mainstream art apps and listings, feels like an appropriate venue for this avant-avant-garde figure. MARTHA SCHWENDENER

The centerpiece of Luke Stettner’s third solo show at Kate Werble Gallery is a shoulder-high concrete sculpture, made in collaboration with Tim Bearse, Will Cornwall and Maxwell Stolkin, that sits in the gallery’s back room. It’s a loose reproduction of a study carrel that the artist, currently based in Columbus, Ohio, remembers from high school in Englewood, N.J. — four conjoined desks forming an unmistakable swastika. Overlooking this piece from the wall is a found photograph in a kind of extended wooden viewing box that shows the artist’s great-grandparents Siegfried and Erna posing on a balcony around 1937, shortly before they fled Germany. A Nazi flag waves in the background right between them.

The original study carrel, one assumes, wasn’t intended to resemble the Nazi symbol, or to evoke shocked recognition in an American teenager whose relatives were exiled or murdered by the armies marching under it. But it is the same shape. Likewise, whoever took the photo of Siegfried and Erna surely didn’t mean to frame them so neatly around the emblem that will shortly drive them out of their country — but there it was.

It’s this gap between intention and meaning, or between the personal scrim through which each of us sees the world and the world itself, that “RI VE RR HY ME SW IT HB LO OD” goes on to elaborate with text pieces, collages and other family mementos. Some are thought-provoking, and some, like a tiny calendar page from 1939, are wrenching — on it, Mr. Stettner’s maternal grandmother, who made it safely to America, crossed off the days waiting for her father, who didn’t. But between them, the two swastikas in the gallery’s back room really do say it all. WILL HEINRICH

From the 1910s to the 1930s, the Viennese-born architect Joseph Urban created sumptuous theater sets for Manhattan impresarios, filling backdrops with jeweled gardens and the occasional zeppelin aloft.

Hundreds of his fragile dollhouse-size mock-ups for the designs survive at Columbia University’s Rare Book and Manuscript Library, which has brought out a fraction of the collection for a beguiling exhibition, “Florenz Ziegfeld & Joseph Urban: Transforming Broadway.” Curated by Jennifer B. Lee, the show combines recently restored set models with memorabilia and thumbnail biographies of Urban’s circle.

Urban was lured from his prolific architecture practice in Vienna in 1911 to work for companies in Boston and then New York, where he designed sets for Florenz Ziegfeld’s “Follies” revue. Ziegfeld hired him for hits (and flops) featuring W.C. Fields, Fanny Brice, Bert Williams, Fred Astaire, Irene Castle and Duke Ellington. Urban nearly upstaged the talents with views of gilded staircases, underwater dreamscapes, tropical groves and castles wreathed in clouds.

For the media tycoon William Randolph Hearst, Urban worked on now-obscure films like “When Knighthood Was in Flower,” starring Hearst’s mistress, Marion Davies. Urban, who died in 1933, at age 61, designed the Ziegfeld Theatre on Sixth Avenue at West 54th Street, financed by Hearst; medieval jesters frolicked in its murals. (The building was demolished in 1966.)

A fascinating subtext is that women held more power than you might expect, given how little the dancers wore — Ziegfeld bragged that his productions were aimed at “Glorifying the American Girl in the Flesh and Blood, Not Canned.” Urban collaborated with his older daughter, Gretl, and she also designed costumes for Ms. Davies, who ended up helping support Hearst through bankruptcy.

Although no videos are playing in the exhibition to show how stars and extras maneuvered through Urban’s simulated paradise, Ms. Lee supplied instructions for finding online postings of vintage recordings and footage. You may leave the library humming Fanny Brice’s “Second Hand Rose” or Paul Robeson’s “Ol’ Man River,” while imagining soaring zeppelins onstage. EVE KAHN 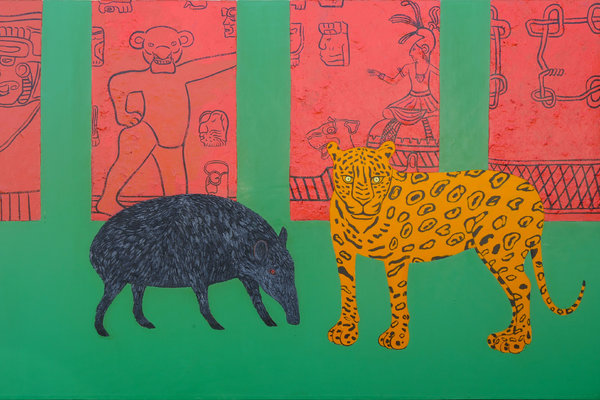 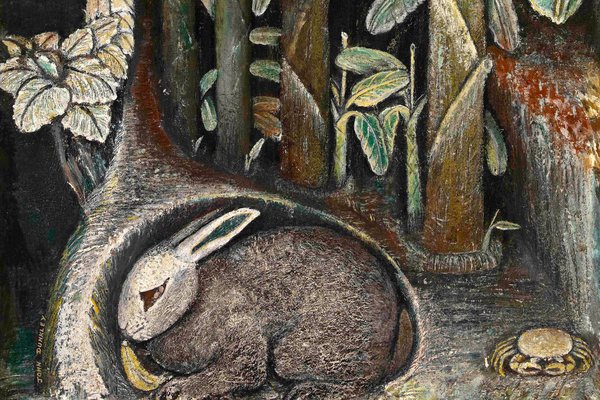 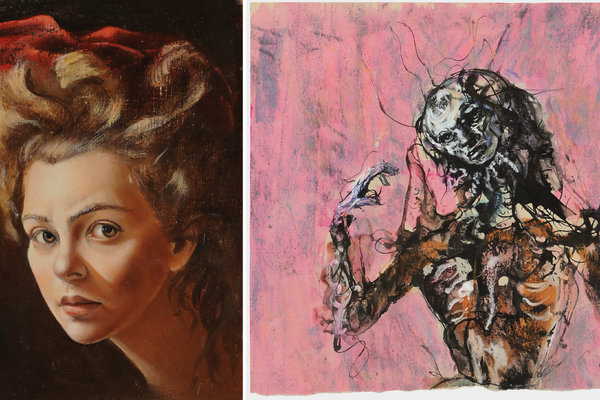