What’s on TV Monday: ‘Manhunt’ and ‘The Good Doctor’

Binge your way through a British crime series on Acorn TV. Or tune into ABC for the season finale of “The Good Doctor.”

MANHUNT stream on Acorn TV. Martin Clunes, known for portraying the title character of “Doc Martin,” a comedy about a grouchy physician practicing medicine in the English countryside, sheds the white coat and dons his serious cap in this three-part crime drama series. Based on a memoir by Colin Sutton, the British detective who led an investigation into the killings of three women that shocked London in the early 2000s, “Manhunt” begins when a young French student is found dead in the suburbs. With no witnesses or forensic evidence on which to rely, Sutton (Clunes) has his team turn over every stone until they find clues that link the murder to two others from years before. The show is already a huge hit in Britain, although critics there disagree about its treatment of murders that really happened — The Guardian called it sober and responsible, but The Independent found the dramatization “exploitative.”

THE PARTY’S JUST BEGINNING (2018) stream on Hulu; rent on Amazon, Google Play, Vudu or YouTube. Karen Gillan (“Jumanji: Welcome to the Jungle”) writes, directs and stars in this dark coming-of-age dramedy about a young Scottish woman who sells cheese at a supermarket by day and drowns her sorrows in alcohol at night. But her wild lifestyle hides somber truths: She’s haunted by her best friend’s suicide, and no amount of partying can help her overcome her grief. 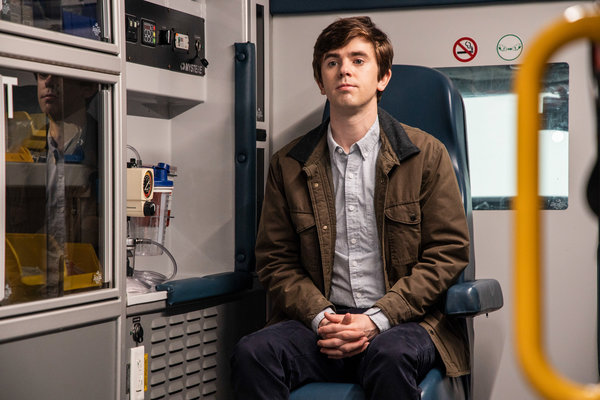 THE GOOD DOCTOR 10 p.m. on ABC. Last week, Shaun (Freddie Highmore) reached a breaking point. After saving a patient’s life, he stormed into Han’s office and demanded to be reinstated. But his outburst may have cost him his job. In the season finale, Shaun gets into a bar fight that lands him in the hospital, and Neil (Nicholas Gonzalez) and Audrey (Christina Chang) reveal their relationship to the rest of the staff.

THE PASSAGE 8 p.m. on Fox. Amy (Saniyya Sidney) tells it like it is in this two-part season finale: “I saw the future — it was bad.” When Tim (Jamie McShane) and the rest of the creatures are close to escaping the medical facility, Amy must decide whether to stop them with an explosion that could harm Brad (Mark-Paul Gosselaar) and Sykes (Caroline Chikezie). Even worse, it could rid any trace of a cure for the virus. In his review for The New York Times, Mike Hale wrote that “what makes ‘The Passage’ a better-than-average show of its type” isn’t its supernatural or conspiracy elements, but the “crowd-pleasing” relationship between Amy and Brad.