Home » Entertainment » What’s on TV Monday: ‘My Brilliant Friend’ and ‘Pentatonix: A Not So Silent Night’

What’s on TV Monday: ‘My Brilliant Friend’ and ‘Pentatonix: A Not So Silent Night’

Catch the season finale of “My Brilliant Friend” on HBO, and watch Pentatonix’s Las Vegas holiday musical special on NBC.

MY BRILLIANT FRIEND 9 p.m. on HBO; also streaming on HBO platforms. HBO’s intimate adaptation of Elena Ferrante’s first Neapolitan novel closes out its first season, which the critic James Poniewozik of The New York Times designated a Critic’s Pick. Directed by the Italian filmmaker Saverio Costanzo, the show largely focuses on the best friends Lenù (Margherita Mazzucco) and Lila (Gaia Girace) as they stumble through a tumultuous adolescence in a poor and violent neighborhood in post-World War II Naples. The finale, like most of the season, finds the girls trying to harness power in situations that leave them largely powerless to the forces (or men) around them: Lenù is kicked out of her high school class for voicing her opinion, and Lila butts heads with her suitor, Stefano, on decisions regarding her family’s shoe business.

PENTATONIX: A NOT SO SILENT NIGHT 10 p.m. on NBC. If you’re still in the mood for Christmas music after the CMA special, or if country just isn’t your thing, the five-member a cappella group Pentatonix has a holiday special that follows the singers along the Las Vegas Strip. As they stop to perform at some of that city’s landmarks, they will be joined by Kelly Clarkson, the Backstreet Boys, Maren Morris and the illusionists Penn & Teller.

VICE SPECIAL REPORT: PANIC: THE UNTOLD STORY OF THE 2008 FINANCIAL CRISIS 10 p.m. on HBO; also streaming on HBO platforms. Ten years after the United States’ worst financial crisis since the Depression, Vice sat down with Barack Obama and George W. Bush to discuss what went wrong, and what unfolded behind the scenes to keep the economy from collapse. Ben Bernanke, a former chairman of the Federal Reserve; Timothy Geithner, then president of the Federal Bank of New York; and Henry Paulson, who was the Treasury secretary, also discuss their combined effort to avert a financial catastrophe. 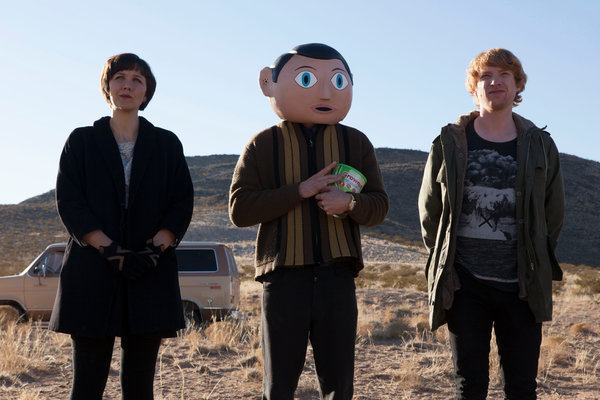 FRANK (2014) on Sundance Now, Hulu, Amazon Prime, Google Play, iTunes, YouTube and Vudu. Before Lenny Abrahamson made his film “Room,” he directed this movie about the bandleader of an experimental musical group who wears a papier-mâché mask over his head. The premise may sound absurd, but it’s based on the story of the pop star Frank Sidebottom, as written by the journalist Jon Ronson, who played keyboard in Sidebottom’s band. The plot makes for a delightfully fun film that’s also an honest look at creative genius and madness. In his review, The Times critic A. O. Scott said that “Frank” was “an accumulation of memorably offbeat moments, like an album made up of B sides and lost demo tracks that you stumble across and can’t stop replaying.”