What’s on TV Monday: ‘The Little Drummer Girl’ and ‘The Last Kingdom’

A six-part spy series begins on AMC. And Season 3 of “The Last Kingdom” lands on Netflix.

THE LITTLE DRUMMER GIRL 9 p.m. on AMC. A 1983 spy novel by John le Carré gets the mini-series treatment with Florence Pugh starring as Charlie, a young, restless actress who is pulled into an international espionage plot when she meets Becker (Alexander Skarsgard), an Israeli intelligence officer. Pulling the strings is the spymaster Kurtz, played by a mustachioed Michael Shannon, who has Charlie take on the role of double-agent in a terrorist scheme that tests her loyalties. For an earlier adaptation of the story, stream the 1984 film “THE LITTLE DRUMMER GIRL” on Amazon, Google Play, Vudu or YouTube.

DANCING WITH THE STARS 8 p.m. on ABC. After a shocking double elimination last week, the final contestants — Bobby Bones, Alexis Ren, Evanna Lynch and Milo Manheim — vie for the mirror-ball trophy in this season finale.

THE JUDGE (2018) 10:30 p.m. on PBS (check local listings). Kholoud al-Faqih, the inspiring heroine in Erika Cohn’s documentary, overcame obstacle after obstacle to become the first female judge in the Shariah courts of the Middle East. Here we see her tenacious battle to represent women in family disputes and hold on to her title, despite misogynist traditions and the conservative clerics working to keep her off the bench.

WATCH WHAT HAPPENS LIVE WITH ANDY COHEN 11 p.m. on Bravo. Mariah Carey returns to the hot seat after the release of her new album, “Caution.” 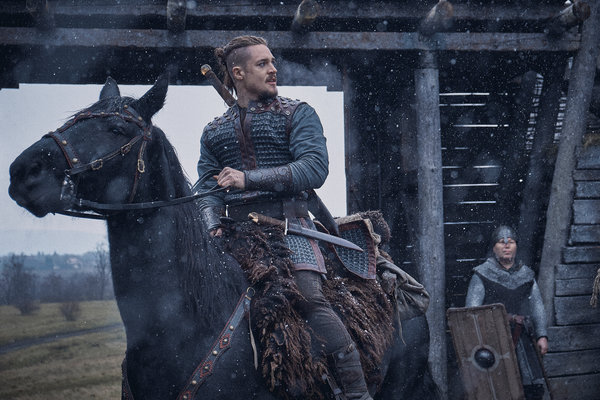 THE LAST KINGDOM on Netflix. If you’re looking for something to fill the “Game of Thrones”-shaped hole in your heart until the final season runs next year, consider trying this fictional drama series about the formation of England. Season 3 picks up at the end of the ninth century, as Uhtred (Alexander Dreymon), a warlord with major identity issues, is forced to battle invading Danes for the ailing King Alfred (David Dawson). The show is based on the series of novels by Bernard Cornwell, and this season focuses on the fifth installment in the saga, “The Burning Land.”

AGATHA RAISIN AND THE WIZARD OF EVESHAM on Acorn TV. The detective at the center of this lighthearted mystery series, based on the books by M. C. Beaton, trades drab trench coats for flashy dresses and a pop of red lipstick. Ashley Jensen (“The Extras,” “Ugly Betty”) returns as the glamorous Agatha Raisin, a London publicist whose retirement in a sleepy Cotswolds village begins her second act as a sleuth. She comes across her first case of Season 2 in a hair salon, where she suspects her obnoxious stylist of teasing dark secrets out of his clients to extort them. “This is an old-school series,” Neil Genzlinger wrote in his review for The New York Times. “Consume as much or as little as you like. It’s a pleasant meal any way you devour it.”