Delve into fraught British affairs with the movie “Brexit” on HBO. Or stick with politics right at home with the documentary “Fahrenheit 11/9” on Amazon Prime.

BREXIT (2019) 9 p.m. on HBO; stream on HBO Go or HBO Now. After an earlier introduction in Britain, the feature-length drama “Brexit” hops across the pond to tell the story — or one possible version — of how the British referendum on leaving the European Union resulted in the narrow triumph of the Leave campaign. Written by the political playwright James Graham, the movie follows the Vote Leave campaign manager, Dominic Cummings (Benedict Cumberbatch) as he ignites a dormant group of voters to “take back control” with strategies to overwhelm the Remain campaign and its leader, Craig Oliver (Rory Kinnear). As the Brexit controversy continues to send shock waves around the world, the only film yet to attempt to unravel the chaos may do the same.

ESCAPING THE MADHOUSE: THE NELLIE BLY STORY (2019) 8 p.m. on Lifetime. Nellie Bly, the famed female journalist, is the stuff of legend — and so is this drama detailing her infiltration of the Women’s Lunatic Asylum (based on the real New York City institution on Blackwell’s Island). Inspired by Bly’s real-life investigation into the mistreatment of mentally ill patients, this movie, starring Christina Ricci, brings a dark intensity to the deplorable conditions Bly experienced, with several cinematic twists.

SICARIO: DAY OF THE SOLDADO (2018) 8 p.m. on STARZ; rent on Google Play, YouTube and Vudu. Josh Brolin and Benicio Del Toro square off in this suspenseful drama, in which an F.B.I. agent and a mysterious operative grudgingly work together to stop a Mexican drug cartel smuggling terrorists into the United States. Despite having a hot-button issue central to the story, the sequel to “Sicario” mostly manages to avoid politics. 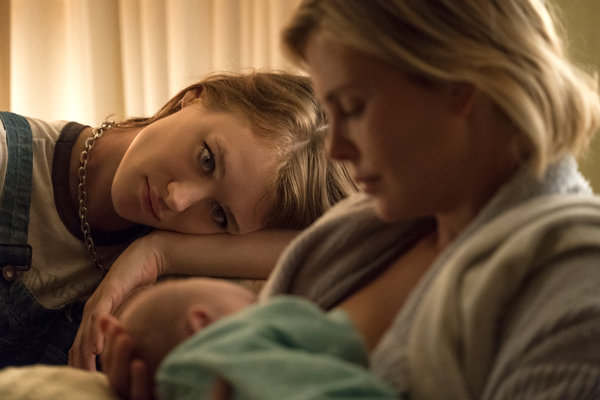 TULLY (2018) 7:30 p.m. on HBO; stream on HBO Go or HBO Now. In this dramedy directed by Jason Reitman, Marlo (Charlize Theron) is an overwhelmed “supermom,” a type many mothers watching the show can probably identify with. When a night nanny named Tully (Mackenzie Davis) arrives to help, the two women form a surprising and special bond.

DYNASTIES 9 p.m. on BBC America. Narrated by the omnipresent naturalist Sir David Attenborough and produced by Mike Gunton of “Planet Earth II,” this series follows five endangered animals as they fight to survive a treacherous world.

FAHRENHEIT 11/9 (2018) stream on Amazon; rent on Google Play, YouTube and Vudu. Michael Moore adds to his documentary credits with a film that points fingers — at everyone. Moore’s sense of outrage at America’s current state is palpable, from the water crisis in Flint, Mich., to his correct prediction of the outcome of the presidential election. But as Glenn Kenny wrote in a review for The New York Times, the film still manages to find hope in young activists who are taking on the country’s most divisive issues.

END_OF_DOCUMENT_TOKEN_TO_BE_REPLACED

END_OF_DOCUMENT_TOKEN_TO_BE_REPLACED
We and our partners use cookies on this site to improve our service, perform analytics, personalize advertising, measure advertising performance, and remember website preferences.Ok