Home » Entertainment » What’s on TV Thursday: The 2018 Americanafest and ‘There’s Something About Mary’

What’s on TV Thursday: The 2018 Americanafest and ‘There’s Something About Mary’

A CMT special brings very American music to a very American place. And Ben Stiller wears braces in “There’s Something About Mary.”

2018 AMERICANAFEST 9 p.m. on CMT. Performing in Nashville at the Ryman Auditorium, sometimes called the Mother Church of Country Music, became a mile marker for country music singers on the rise in the 1940s, when the auditorium began its decades-long tenure as home of the country music radio program the “Grand Ole Opry” and wove itself into the fabric of Americana. This special, filmed at the Ryman in September during CMT’s Americana Honors and Awards ceremony, has performances from American stars old and new: Rosanne Cash performs a song from her latest album, “She Remembers Everything,” which was well received when it was released in October. Also on the bill are the alt-country singer Brandi Carlile and the more recently minted star Margo Price. The program extends beyond country, with the venerable blues guitarist Buddy Guy performing, along with the genre-straddling blues and R&B singer Fantastic Negrito and the Southern rock singer Jason Isbell and others. 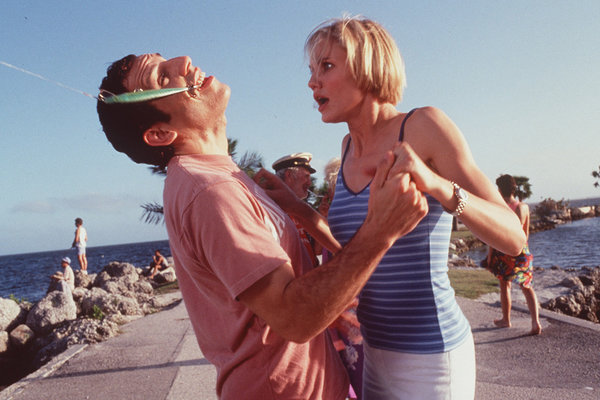 THERE’S SOMETHING ABOUT MARY (1998) 8 p.m. on HBO. Ben Stiller plays the dorky Ted Stroehmann, who has had a crush on Mary Jensen (Cameron Diaz) since he was a brace-wearing teenager. In his late 20s, he seeks her out. It’s hard to imagine that this is the same Stiller who directed the recent true-crime series “Escape at Dannemora” — this gross-out comedy directed by Peter and Bobby Farrelly (“Dumb and Dumber”) is just as ridiculous (maybe even more so) 20 years later. In her review for The New York Times, Janet Maslin called it “proudly obnoxious,” writing that the movie is “a hoot in every sense, worth a smidgen of disapproval and a whole lot of helpless laughter.”

DONNIE DARKO (2001) on Showtime streaming platforms, Google Play and YouTube. The Darko family is midway through dinner when Elizabeth Darko (Maggie Gyllenhaal) utters a sentence her father fears: “I’m voting for Dukakis.” The 1988 presidential election, in which George Bush, the vice president, ran against Gov. Michael S. Dukakis of Massachusetts, provides the backdrop for this cult psychological thriller. Jake Gyllenhaal plays Donnie, a teenager who begins having grim visions that signal an impending doomsday. Election talk isn’t the only sign of the film’s late-1980s setting; among the movie’s period flourishes is the soundtrack, which features Tears for Fears, Duran Duran and Echo & the Bunnymen.

CHAPPAQUIDDICK (2017) on Netflix. John Curran’s speculative historical drama casts Jason Clarke as Senator Edward M. Kennedy in this movie about the infamous night when a car driven by Kennedy ran off a bridge, and Mary Jo Kopechne (Kate Mara) died. “Whether or not events actually unfolded this way, the story the film tells is an interesting and complicated character study,” A. O. Scott wrote in his review for The Times.