A beloved 1990s movie gets a new TV adaptation on BET. And an absurd anthology series debuts on TBS.

BOOMERANG 10 p.m. on BET. The screenwriter Lena Waithe (“Master of None”) gives the 1992 romantic comedy “Boomerang” the television treatment. The movie stars Eddie Murphy as Marcus, a womanizing advertising executive who ends up in a love triangle between his boss, Jacqueline (Robin Givens), and a co-worker, Angela (Halle Berry). Set in the present, this new series imagines the lives of Marcus and Angela’s daughter (Tetona Jackson) and Jacqueline’s son (Tequan Richmond), 20-somethings trying to make it in the advertising industry in Atlanta. “Even if you’ve never seen the movie, you can appreciate the show and see the subtle nuances through which we pay tribute to the original,” Waithe said in a recent interview with The New York Times. She added: “But we are also trying to create our own lane.”

THE MANY LIVES OF NICK BUONICONTI (2019) 10 p.m. on HBO; stream on HBO platforms. In the 1970s, the football player Nick Buoniconti led the Miami Dolphins; retired and became a lawyer and sports agent; and began hosting HBO’s “Inside the N.F.L.” with Len Dawson. In 1985, his focus shifted when his son, Marc, suffered a spinal cord injury while playing college football that left him quadriplegic. Since then, Buoniconti has become an outspoken activist for research into spinal cord and brain injuries. This new portrait depicts the accomplished athlete, from his early days as a “ferocious fighter” to his later years as a philanthropist. 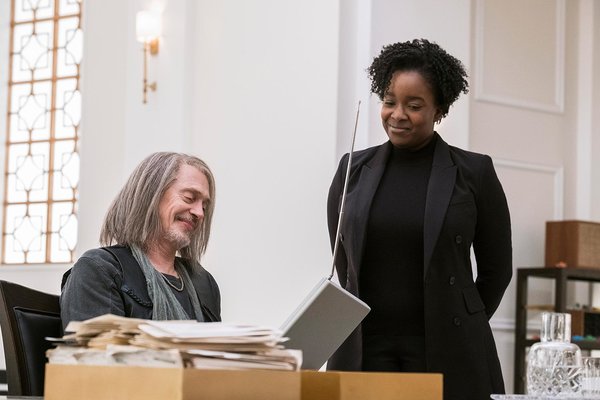 MIRACLE WORKERS 10:30 p.m. on TBS. Based on the novel “What in God’s Name,” by Simon Rich, this new limited series stars Daniel Radcliffe as Craig, an underpaid angel tasked with fulfilling prayers. When his boss, God (Steve Buscemi), decides that Earth is no longer worth his time, Craig and another angel, Eliza (Geraldine Viswanathan), work to prevent its destruction by achieving a true miracle: helping two socially awkward people fall in love.

BOY MEETS GIRL on Britbox. This short-lived series made waves in Britain when it premiered on BBC Two for casting Rebecca Root (“The Danish Girl”), a transgender actress, in a lead role. She plays Judy, a middle-aged transgender woman who falls for a much younger man, Leo (Harry Hepple). The first season focuses on the reaction of Leo’s family to his new relationship, but when that story line ended there was not much left to work with: The show got the ax after just two seasons.

THE BLUES BROTHERS (1980) stream on Amazon; rent on Amazon, Google Play, iTunes, Vudu or YouTube. This classic comedy, born out of “Saturday Night Live” skits, follows two brothers (Dan Aykroyd and John Belushi) who get their band back together to raise $5,000 to keep the orphanage they were born in from being sold. Watch for over-the-top car chases and cameos by musicians like James Brown, Ray Charles and Aretha Franklin.