ELLEN DEGENERES: RELATABLE (2018) on Netflix. Much of the world knows Ellen DeGeneres as the gift-giving daytime talk-show host Ellen — not the stand-up comic Ellen. But after a 15-year hiatus, DeGeneres returns to her stand-up roots in this new special, directed by Tig Notaro and Joel Gallen. She jokes about both hard truths (her reputation makes her feel as if she “can never do anything unkind ever”) and mundane things (“When we try on shoes, we do things we’re never going to do in them”). In a recent interview with The New York Times, DeGeneres, 60, said she has been considering retiring from “Ellen” and has learned to care less about others’ expectations. “I wanted to show all of me,” she said, referring to her return to stand-up. “The talk show is me, but I’m also playing a character of a talk-show host. There’s a tiny, tiny bit of difference.”

EVAN ALMIGHTY (2007) on iTunes, Amazon, Google Play, Vudu and YouTube. Those who miss the goofy side of Steve Carell can turn to this sequel to “Bruce Almighty," in which he plays a newly elected congressman who is instructed by God (Morgan Freeman) to build an ark. Wanda Sykes, Molly Shannon and Jonah Hill round out the cast.

TERRACE HOUSE: OPENING NEW DOORS on Netflix. The fifth batch of “Opening New Doors” episodes premieres. When three superfans from The Times unpacked this popular Japanese reality show’s appeal, the critic Amanda Hess applauded the “beautiful male tears.” “Stranded here in the desert of American masculinity,” she wrote, “the scenes of the male housemates crying are a rare and inviting oasis.” 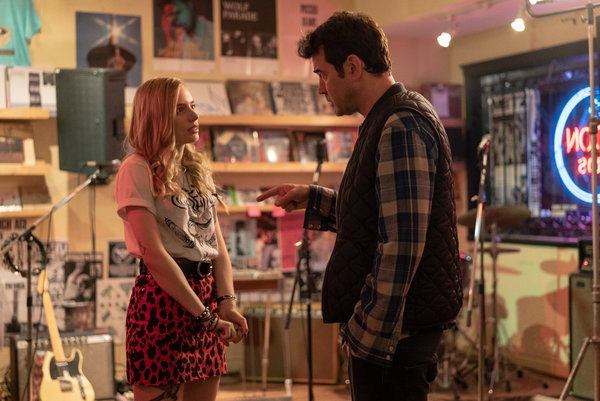 LOUDERMILK 10 p.m. on AT&T Audience Network. Season 2 of this dark comedy by Peter Farrelly (“Green Book”) and Bobby Mort (“The Colbert Report”) wraps up with Sam (Ron Livingston) losing his father and trying to keep the “Sober Friends” meetings that he runs as ordinary as usual. Livingston’s irritable substance-abuse counselor won’t be gone for too long; the series was recently renewed for a third season.

GREATEST HOLIDAY COMMERCIALS COUNTDOWN 8 p.m. on the CW. Nothing says Christmas like sentimental, high-quality commercials that may actually convince you to reach for that credit card. In this new special, the hosts Kevin Frazier and Keltie Knight highlight 12 of the most memorable holiday advertisements of all time. If we were to take a wild guess, this John Lewis & Partners ad featuring Elton John may make the cut.

THE VOICE 9 p.m. on NBC. Season 15 comes to a close with one artist walking away a winner. Halsey, John Legend, Cher and more perform.

THE GUEST BOOK 10:30 p.m. on TBS. In the Season 2 finale of this wacky series, a family spends its vacation on Mabel Beach and the unhappy husband sees it as an opportunity to let his obnoxious wife know how he really feels. Guest stars include Matt Walsh, Michael Kenneth Williams.