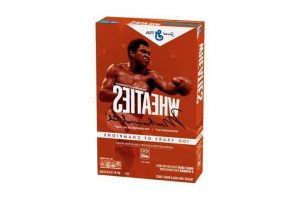 Wheaties is marking 100 years and continuing its tradition of recognizing athletes and their achievements with a limited-edition Century Box Series. The first of the series sees one of the greatest boxers of all time, Muhammad Ali, grace the collectible box cover.

The classic cereal has chosen to kick off the series with the legendary Ali to honor the athlete’s six core principles of confidence, conviction, dedication, giving, spirituality and respect. Ali marveled audiences in and out of the ring as a three-time world heavyweight boxing titleholder and gold medalist at the 1960 Roman games. He was also a pillar in human rights, known for standing up for minority races and religions throughout his life. Ali’s wife Lonnie Ali said, “Muhammad was a man of principle and strength, he fought against discrimination and injustice in their many forms. He was a voice for equality and justice for all. He would be honored to be the first athlete featured on the Wheaties Century Box so that his enduring wisdom, optimism and hopes can continue to affect emerging athletes and humanitarians.”

The collectible box is set to be the first of a multi-part commemorative series that will launch throughout Wheaties’ centennial year. Fans can look forward to seeing an array of recognizable inspirational champions spanning over decades of sports and unforgettable cultural moments.

In case you missed it, a new plant-based tuna is in town and it is coming to restaurants in 2022.
Source: Read Full Article