Home » Entertainment » When Did Denise Richards and Brandi Glanville Allegedly Hook Up? A Timeline

When Did Denise Richards and Brandi Glanville Allegedly Hook Up? A Timeline 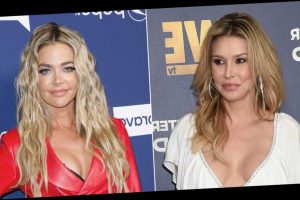 Bravo, Bravo, f—king Bravo! Denise Richards and Brandi Glanville’s drama is finally playing out on The Real Housewives of Beverly Hills — and Us Weekly is helping viewers put the missing pieces together.

Brandi, 47, detailed her alleged affair with Denise, 49, on the July 22 episode of RHOBH.

“I saw her in April and then I didn’t see her again until your party and some s—t went down over those nine months that was — it’s really f—king bad,” Brandi told Kyle Richards and Teddi Mellencamp. “I had been out with her and [her husband] Aaron [Phypers] and I knew that they have, like, an understanding, like she could be with girls if she wanted to. … The first night we met, something happened.”

According to Brandi, the two women drunkenly made out once before the Drinking and Tweeting author visited Denise on the set of a movie in April 2019.

“I went and I was going to get my own room, but Denise said, ‘No just stay here. It’s fine. I’ll get you a rollaway bed,’” Brandi said on the episode, noting that Denise’s daughter 15-year-old daughter, Lola, was also on the trip with a friend. “There was no rollaway bed. … And so I just slept in the bed with Denise.”

Brandi subsequently alleged that the two women had sex. Denise, for her part, has denied the accusations.

“I was uncomfortable. The kids were downstairs and we were in the loft and there was no door. And I just couldn’t get into it,” Brandi claimed. “The next day, Denise said to me, ‘No matter what you do, you just can’t tell Aaron. He will kill me.’ And I’m like, ‘What the f—k is happening right now?’”

While a source insisted to Us Weekly that Brandi had her own room and Aaron was present on the aforementioned set visit, Brandi told Us that she “never even saw” Denise’s husband during her two-night stay. Brandi later tweeted text messages that allegedly prove Denise invited her to stay in the same room.

“He knew I was coming and he knew I was there,” Brandi claimed to Us. “The morning after … I was just kind of in shock by it. And she continued to be really nice to me. And she would text me to check in but she was just very unavailable, she definitely hit it and quit it. So I was like, ‘Oh s—t, this bitch.’”

The Real Housewives of Beverly Hills airs on Bravo Wednesdays at 9 p.m. ET. Scroll through for a complete timeline of the drama: