Home » Entertainment » When These Lines Are Drawn, Artist and Dancers Connect

When These Lines Are Drawn, Artist and Dancers Connect

The opening night of New York City Ballet’s winter season was hours away, and several dancers were trying to perfect their lines onstage at the David H. Koch Theater. As they danced, a work crew just outside the auditorium struggled with another kind of line.

The crew was covering the floor of the theater’s airy promenade with a 127-foot-wide line drawing by Shantell Martin, the featured artist in City Ballet’s annual art series, which transforms the theater and aims to attract new audiences to dance.

Line is at the heart of Ms. Martin’s work. And line, in another sense, forms the core of ballet. As the dancers and the artist got ready on Tuesday afternoon, they tried to explain.

“The ink marker, you have to approach it in a certain way to get a nice, solid crisp line,” said Ms. Martin, whose work has been shown at the Brooklyn Museum, the Albright-Knox Art Gallery in Buffalo and Art Basel Miami, where she collaborated with Kendrick Lamar. “There’s lots of things going on just to have the line do what you want — almost like how on stage there are so many different things going on to get that line the way they intended it to be.”

Silas Farley, a member of the corps de ballet, explained the specific meaning line has in dance. “That’s our form of speech,” he said. “Your line is your voice, and your personality. Every dancer has a little different inflection in their line, like a different inflection in a speaking voice, or an accent. You see that in a body. We’re all trying to conform ourselves to these ideal shapes.”

Mr. Farley said that ballet is built on shapes — like spheres and right angles. “Most bodies can’t actually do those perfect shapes,” he continued. “But it’s that pursuit of that ideal, harmonious proportioned line that is our livelihood, our discipline and our practice. And we retire before we ever get to achieve it.”

With its art series, City Ballet is trying to present ballet to audiences that may not have been exposed to it before — luring them with three special art-themed performances (all tickets are just $35), followed by parties. In past years, the artist JR covered the promenade with a collage of photos of dancers, and Jihan Zencirli (a.k.a. Geronimo) flooded it with colorful balloons. 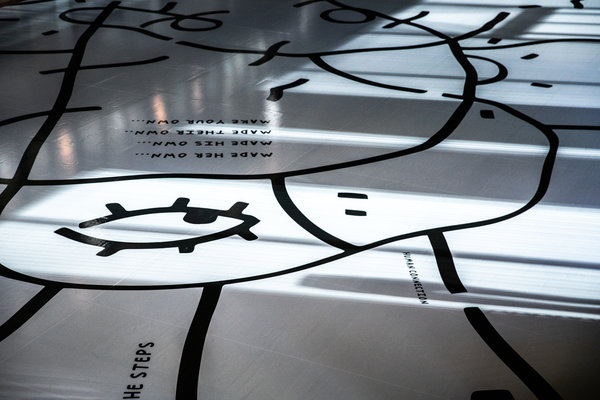 It has been effective: The art series has attracted 20,000 newcomers to City Ballet, the company said, and 17 percent of those newbies returned for other ballet performances.

To prepare this year, Ms. Martin, who was born in London and is now based in New York, spent several days at the theater drawing as she watched rehearsals. It was not her first time drawing to music and dance: Early in her career, she said, she drew in nightclubs in Japan.

“In my past life, for many years I was a V.J. — a visual jockey,” Ms. Martin said. “I would do live drawing, digital or analog visuals to D.J.’s and dancers and musicians. In a way, it was very stream of consciousness: drawing to the beat, zooming in, zooming out and moving around. So this was almost a very analog version of that.”

She watched rehearsals for Balanchine classics, including “The Nutcracker,” and a new work by Justin Peck, with the choreography and the lines of the dancers informing her work. “There is an interesting feedback loop,” she said. “You have these lines and movements onstage that are also affecting the lines and movement and the dance of the pen on the canvas.”

Before creating the large piece — which was blown up to nearly 100 times its original size — she asked the dancers a question that has informed much of her recent work: “Who are you?”

Maria Kowroski, a principal dancer, said it was not easy to answer.

“When you strip away, you can’t label yourself as just a dancer, or just a mom, or just a friend or a daughter or a sister or a wife,” she said. “Usually the times I’ve really stopped to find myself was when I couldn’t dance. And when that’s taken away from you, for whatever reasons, injury or illness, all of a sudden you’re like, ‘Wait, who am I if I don’t have that?’”

Excerpts from those conversations appear as text in the giant drawing. “Take a break from the mirror.” “Love who you are.” “Let your drive and personality come forward.”

The blown-up drawing was printed out on 60 sticky-backed vinyl panels. As Ms. Martin looked on, the workers stuck the disjointed panels to the floor, smoothed out the air bubbles, and tried to make her long, sinuous lines appear seamless.