When Will We See Meghan Markle & Baby Archie Again?

It’s only been a week since the newest addition to the royal family was born, and it’s safe to say we’re all officially smitten with sweet baby Archie. A few days after his May 6 birthday, the newborn was debuted by Prince Harry and Meghan, Duchess of Sussex at their first family photocall. Then, on Mother’s Day, the couple shared a photo of the little royal’s tiny, almost-too-adorable toes. We’re already looking forward to the next heartwarming glimpse of the Duchess of Sussex and her firstborn child — and we might actually have a solid idea of when to expect it. So, when will we see Meghan and baby Archie again?

Let’s do a bit of royal math, shall we? Much like the first family photocall, there are a few official public appearances all royal babies apparently make. Among those early cameos is the child’s christening. According to the U.K.’s Express, no date has been announced for baby Archie’s christening yet, and christenings typically occur anywhere between a child’s third and six months of life. However, if we look to the royal family, a pattern does seem to emerge.

If we follow the logic, baby Archie will appear with his royal mum and dad sometime within the next two to three months. If they opt for two months, Archie could be christened the first week of July. If they wait for the full three, his christening would fall the first week of August. 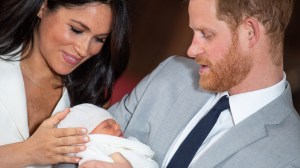 To arrive at that conclusion, we crunched numbers from one of Harry’s closest relatives: his brother. Prince William and Catherine, Duchess of Cambridge gave birth to their first child, Prince George, on July 22, 2013. He was christened three months later (almost to the day) on October 23, 2013. Their second child, Princess Charlotte, was born May 2, 2015 and was christened July 5, 2015 — or at two months old. And, finally, their youngest son, Prince Louis, was born on April 23, 2018. The parents seemed to split the difference between the ages of their other two children at their christenings and had Louis christened around two-and-a-half months.

Since no information surrounding baby Archie’s christening have been made public at this point, we can only speculate as to the details. A safe bet for where? St. George’s Chapel in Windsor, which is where Harry and Meghan were married and where Harry was baptized when he was a child. Bonus? It’s super-close to their home of Frogmore Cottage. If Harry and Meghan choose to follow royal family tradition — and they’ve certainly been known not to on occasion — Archie will wear the same gown for his christening that 60 royal babies before him have worn.

The good news is that, for all of the uncertainty right now, the odds are in our favor that we’ll be seeing Meghan and baby Archie this summer. While it’s possible he’ll pop up here and there prior to then, we also have to respect the fact that Harry and Meghan are trying to ensure their child is raised with as much normality as possible for a royal.

But, in full disclosure, we’re counting down the days to sweet baby Archie’s christening. He’s going to look adorable in that gown!