Home » Who Needs an Album? Just Keep Remaking the Song!

Who Needs an Album? Just Keep Remaking the Song! 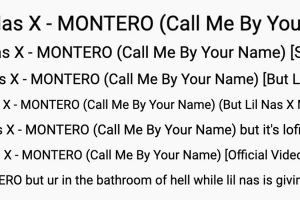 “Beat Box,” by the young Florida rapper SpotemGottem — a thunderous, pulsing sneer of a track — was released just over a year ago. It bubbled lightly throughout the summer and fall, and then in December came a remix, “Beat Box 2,” with the rising Memphis star Pooh Shiesty. Not long after, on Dec. 23, a dancer named Junebug posted a video doing an exaggeratedly comic shimmy dance step to the song. Called the #JunebugChallenge, it spread wildly on TikTok, replicated in oodles of videos.

Now, a year after its initial release, “Beat Box” is, somehow, still going. On Feb. 26 came “Beat Box 3,” with DaBaby. On April 9, “Beat Box 4,” with NLE Choppa. Last Friday it was “Beat Box 5,” with Polo G. There’s a version with Mulatto, a reggae remix with Shenseea, unofficial versions by Young M.A., Kevin Gates, Lil Yachty and Calboy and many more.

All told, “Beat Box” has hundreds of millions of streams across Spotify, YouTube and other platforms, and recently peaked at No. 12 on the Billboard Hot 100.

Currently at No. 4 — after a No. 1 debut a couple of weeks ago — is “Montero (Call Me by Your Name)” by Lil Nas X. The initial rollout of “Montero” was a masterwork of moral-panic marketing, with Lil Nas X using Twitter for target practice against knee-jerk conservative critics, ginning up conversation and attention.

But in the weeks since, Lil Nas X has taken an unconventional approach to amplifying the song, steadily releasing new, lightly tweaked versions (on YouTube and elsewhere) with subtitles that wink at gaming the system: “Satan’s Extended Version,” “But Lil Nas X Makes All the Sounds With His Mouth,” “but it’s lofi and something you can study to lol,” “But Lil Nas X Is Silent the Entire Time.” The new versions have combined tens of millions of streams.

Both “Beat Box” and “Montero” are case studies in how to extract maximum value from a single song, a strategy that — as the internet and streaming services push artists away from albums and toward songs (or, sometimes, snippets of songs) — is emerging as an elegant promotional solution: If people decide they want to listen to your song, simply give them more of it.

Increasingly, the biggest pop stars talk about their careers in terms of “eras” — that’s less shorthand for an album cycle than a grandiose umbrella term for all the things that come with re-entering the public sphere after a bit of a down phase, from sonics to aesthetics. But that also underscores that the album is decreasingly relevant as a destination point, something especially true for artists on the rise, for whom the scramble for sustained attention can be Darwinian.

Generally, the internet lets you know if you’ve caught a wave; the challenge then becomes determining how to stretch out the ride. For younger artists, especially those who catch fire on TikTok, lengthening the life of a song — see also: the emergence of the TikTok remix — is crucial to setting a foundation for a chance at something beyond a one-viral-smash career. Flooding the zone with versions of the original song extends its life, and crucially, punts the question of whether a similar buzz could be generated with a new single.

Even the current No. 1 song in the country, Polo G’s “Rapstar,” is a long-tail extension, in a way. It began life as a short acoustic video filmed with the hip-hop producer and ukulele player Einer Bankz, released last May. Fan interest convinced the two to complete and polish the song (part of another trend of artists testing ideas out online in snippets or stripped-down format before committing to a full production).

“Beat Box 2” was on SpotemGottem’s December album “Final Destination,” but all the real action was happening online. The unauthorized remixes began spreading in January, just as the Junebug Challenge was swarming on TikTok (a representative for the app said “Beat Box” has been used in approximately 1.1 million videos). In essence, the song itself had become a meme, a viral-tuned update of time-tested phenomena like when dancehall artists clamor to record on the same riddim or mixtape rappers appropriate popular beats to rap over themselves.

DaBaby released an unofficial remix in February, and it was quickly made official. Polo G, Mulatto and NLE Choppa’s began unofficial as well. For now, the versions with Pooh Shiesty and DaBaby are becoming the canonical ones, with the spicy Young M.A. one close behind. In almost all of the videos for these remixes, the rapper also does a version of the Junebug Challenge — they are participating in the meme exchange even as they are extending it, laborers all essentially marketing the same idea, artist and song.

For Lil Nas X, the additional versions of “Montero” are, musically speaking, curios. Additional versions of “Beat Box” are additive — they deepen the song’s impact. But the extra takes on “Montero” serve as commentary — they are disruptions, much like the way Lil Nas X’s career has been a disruption, and has consistently revealed novel ways to will oneself into music stardom. The Lil Nas X marketing course continues unabated, and every part of the second wave of the “Montero” rollout is an extended joke that you’re invited into.

He has extended a song’s life before, in 2019, with the multiple remixes of “Old Town Road” that kept it at the top of the Billboard Hot 100 for 19 weeks. And in the two-plus years since he originally released that industry-recalibrating track, Lil Nas X has yet to put out a full-length album. The post-album pop star has arrived — maybe he’s onto something.