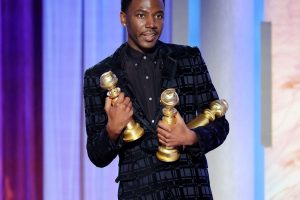 The Golden Globes host’s comment about Shelly Miscavige was met with gasps IRL – but people on Twitter loved it. Especially ex-Scientologist Leah Remini.

Jerrod Carmichael might just go down in history as one of the most memorable Golden Globes hosts of all time. Ever.

In the comedian’s opening monologue, he explained why he was so hesitant to take the job in the first place, recalling how the awards show was cancelled last year following an exposé into the lack of diversity at the Hollywood Foreign Press Association (HFPA).

“I won’t say they were a racist organisation, but they didn’t have a single Black member until George Floyd died,” he said. “Do with that what you will.”

Golden Globes 2023: the best fashion moments from the red carpet

It was Carmichael’s jab at Tom Cruise, however, which saw the comedian win approval on Twitter from viewers watching the event at home.

Now, Top Gun: Maverick was nominated for two Golden Globe awards, including Best Motion Picture, but Cruise was notably not in attendance at the ceremony.

His absence shouldn’t have come as a big surprise to anyone, especially as the actor famously returned three of his Golden Globes when the racial controversy engulfed the HFPA in 2021.

However, Carmichael clearly isn’t all that impressed with Cruise’s gesture of solidarity – especially as the actor is such a public face for the Church of Scientology.

The secret Scientology reference you almost definitely missed in Friends

“I think maybe we take these three things and exchange them for the safe return of Shelly Miscavige.”

The barbed comment was met with gasps by those at the event, but has since been making the rounds on social media.

“I know everyone’s all about Jerrod Carmichael’s opening #GoldenGlobes monologue, and rightfully so, but this Shelly Miscavige joke about Scientology is a DEEP cut worth noting,” reads one tweet by Tim Millard.

Christina Rodriguez tweeted: “Bold as hell to make a Shelly Miscavige joke in a room full of at least 50 Scientologists.”

For those who haven’t been following the story of Shelly Miscavige, some context: the wife of Scientology leader and Cruise confidant David Miscavige, has not been seen in public since 2007.

Her whereabouts have been the subject of speculation for years, with the LAPD conducting an investigation in 2013 after prominent ex-Scientologist Leah Remini filed a missing person report. The case was closed after officers had a face-to-face meeting with Shelly Miscavige, and they informed the press that claims she was missing were “unfounded.”

Even now, though, Remini and other ex-Scientologists continue to allege that the investigation was corrupted by the Church of Scientology, and that Shelly Miscavige could still be in danger.

And so, responding to Carmichael’s joke on Twitter, Remini – who made a point of resharing the letter she asked LAPD detectives to hand Shelly Miscavage when they found her – tweeted: “Thank you Jerrod Carmichael!

The Church of Scientology has yet to respond to Carmichael’s comments.

It is worth noting, though, that they previously put out a statement to Radar in 2013 about Shelly Miscavage’s whereabouts.

“Mrs. Miscavige is a private person and her affairs are a private matter,” a Church Of Scientology official said at the time.

“She continues to work in the Church as she always has.”