Why Painting Isn’t as Elitist as You Might Think

LONDON — “Museums. Ugh,” said Amy Cappellazzo, the chairman and executive vice president of Sotheby’s, having been told of the German artist Gerhard Richter’s long-held desire for his paintings to acquired by public galleries, rather than private collectors. “That’s a very socialist, democratic way of having to deal with, like, rich people who want them,” added Ms. Cappellazzo. A forthcoming Sotheby’s auction included abstracts by Mr. Richter valued at $20 million to $30 million each.

This is a moment in “The Price of Everything,” a documentary which takes us inside the finance-crazed alternative reality of the international art world. Scrupulously nonjudgmental in approach, the movie, directed by Nathaniel Kahn, stars some of the market’s most influential artists, collectors, critics and dealmakers.

We meet Jeff Koons in his high-tech studio, surrounded by assistants making his old master-inspired “Gazing Ball” paintings. We see the feted Nigerian-American artist Njideka Akunyili Crosby watching online as one of her paintings is bid to $900,000 at auction. We’re invited into the apartment of Stefan Edlis, the collector who gifted $500 million of contemporary masterworks to the Art Institute of Chicago. We watch George Condo, whose art is also priced in the millions — painting — and repainting — a canvas before lunch.

Mr. Kahn’s movie eloquently demonstrates how painting, above all other art forms, keeps the top end of the market bubbling. “The Price of Everything” ends, suitably enough, with a Leonardo da Vinci being sold for $450.3 million in a contemporary art auction. 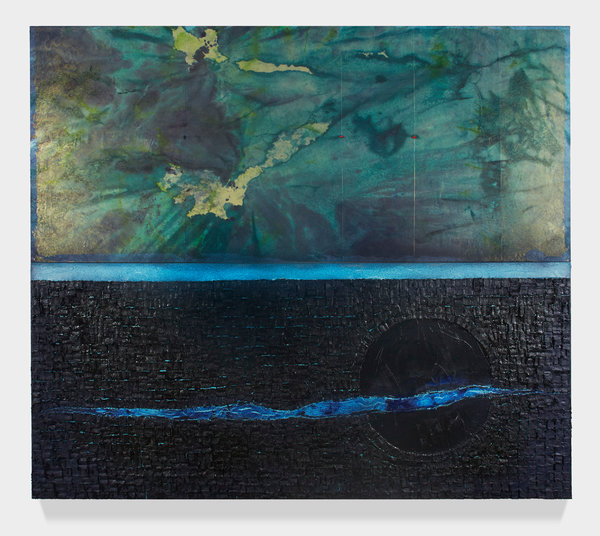 “The thing about a painting is it’s unique. You have the hand of the artist. You can own it, you can transport it. It can accrue value, it lives in its own world,” said Tom Eccles, director of the Center for Curatorial Studies at Bard College in New York, in a telephone interview. “And to display it, you just need a nail.” Other kinds of art works require “a different kind of commitment,” he added.

But the commercial dominance of painting has produced a reaction. Judges of some of the most prestigious public awards for contemporary art regard other media as more in tune with our times.

A performance piece by Anne Imhof, representing Germany, won the Golden Lion at last year’s Venice Biennale. Clément Cogitore, a filmmaker, won this year’s Prix Marcel Duchamp in France. And all four of the artists shortlisted for Britain’s 2018 Turner Prize used video or film as their medium. The institutional art world would appear to be distancing itself from the market. But paradoxically, by favoring performance and video over the “rich people’s” medium of painting, these institutions face their own issues of exclusivity.

Back in the commercial art world, painting was still holding sway in Miami Beach this month at the Art Basel fair, which ended Sunday. At the fair itself, among the blue-chip contemporary works, Gagosian was offering the 2015 Jeff Koons painting, “Gazing Ball (van Gogh Wheatfield with Crows),” priced at $3.25 million.

Nearby, those on the lookout for new market darlings were eyeing four paintings by Vaughn Spann, a recent masters graduate from the Yale School of Art, included in a show of new acquisitions at the influential Rubell Family Collection. The previous week, Mr. Spann, who makes richly textured paintings in both abstract and figurative idioms, was the subject of a sellout show at Half Gallery in New York. Prices ranged from $7,500 to $30,000.

The day before the Wednesday preview of Art Basel, the Glasgow-based multidisciplinary artist Charlotte Prodger was announced as the winner of the 34th Turner Prize. Ms. Prodger was represented at Tate Britain’s finalists’ exhibition by the 33-minute film “Bridgit.” Shot entirely on an iPhone, the work is an autobiographical meditation on queerness, identity and time that features enigmatic scenes of the artist’s apartment, a Scottish forest, a yawing ferry deck and a row of Neolithic standing stones.

Apart from a short trailer, “Bridgit,” like almost all the other videos in the Turner Prize exhibition, could only be viewed in full in the gallery and was not available online. Similar viewing restrictions apply to Christian Marclay’s celebrated 24-hour video, “The Clock,” currently drawing lines at Tate Modern, which part owns (together with the Pompidou Center in Paris and the Israel Museum) one of the edition of six. But Mr. Marclay stipulates that his video should be viewed in museums free to maximize its audience. Tickets to the Turner Prize show cost as much as 13 pounds, or about $16.

“‘It’s a video installation. You’re physically required to be in that space,” said Lisa Panting, a co-founder of Hollybush Gardens, the east London dealership that represents Ms. Prodger, who has been chosen to represent Scotland at next year’s Venice Biennale. “It’s not like watching a video on YouTube,” she added.

Ms. Panting said “Bridgit” had been produced in an edition of three. Versions have been sold to the Arts Council of England, a public body that funds cultural events, and the Gallery of Modern Art, Glasgow, for less than £50,000 each, according to Ms. Panting. She said she did not know when or where the film could be seen after the show at Tate Britain closes on Jan. 6.

In his groundbreaking 1936 essay, “The Work of Art in the Age of Mechanical Production,” the philosopher Walter Benjamin wrote how the “aura” of an original work of art “withers” the more it is reproduced. But now in the digital age, high resolution illustrations have become so accurate and ubiquitous that we feel we “know” certain artworks, particularly paintings, without seeing them in the original. By contrast, creators of videos or performances can feel their work is diminished by mass reproduction.

“Today I work with artists making film-based works who are wondering whether they should distribute them through Amazon Prime or Netflix,” said Mr. Eccles of Bard. “But then is it an artwork or not?”

The art market and public institutions can seem at times to be far-distant worlds. One fetishizes the historical prestige of painting; the other, multidisciplinary experimentation. But of course the two worlds overlap all the time.

The London branch of the international dealership Hauser & Wirth, for example, is currently showing “Toast,” a museum-quality selling exhibition of recent works by the British conceptual artist Martin Creed, who won the Turner Prize in 2001.

Free to the public, the show includes his trademark numbered works in painting, drawing, sculpture, textile, music, performance and video. “Work No. 3071” is a bronze of a piece of toast spread with gold peanut butter, priced at $35,000. The gallery is periodically darkened for a performance and videos, including the film “Difficult Thoughts,” showing the artist repeatedly bending 90 degrees in a busy London street. Again, these have to be experienced in person in the gallery and can’t be viewed online.

The title of Mr. Kahn’s documentary derives from an interview with Mr. Edlis, the collector. Quoting Oscar Wilde, Mr. Edlis said that people in the art market “know the price of everything, and the value of nothing.”

At last week’s Turner Prize presentation, Maria Balshaw, director of Tate, lamented in a speech that art was insufficiently valued in the British education system. Thanks to the internet, almost anyone can learn what a painting priced at $450.3 million looks like. But the value of other kinds of art, such as video and performance, can be more difficult for a wider public to appreciate, if going into a gallery is the only way of seeing them.