Home » Entertainment » Why Store Art When You Can Show It? A Collector’s Trove

Why Store Art When You Can Show It? A Collector’s Trove

Reginald Van Lee should have bought those Basquiats when he had the chance.

Jean-Michel Basquiat, before he was famous, offered two of his paintings to Mr. Van Lee, who declined, having never been a fan of that artist’s work. Mr. Van Lee wanted to kick himself when he saw a Basquiat sell for more than $110 million at auction in 2017. But his decision was consistent with Mr. Van Lee’s principles over the 20 years he’s been collecting: buying only art that he loves, never acquiring a piece solely because it is likely to appreciate in value.

That approach is evident in his 55th-floor apartment overlooking the East River, where he has been spending more time since he retired in 2016 from the consulting firm Booz Allen Hamilton. The work on the yellow walls is mostly by African-American artists, including the sculptor and muralist Cheryl R. Riley and the emerging painter Tyler D. Ballon, who only recently graduated from art school. With the help of his art adviser, Peg Alston, Mr. Van Lee has acquired mixed media works by Shinique Smith, sculptures by LeRone Wilson and photography by Renee Cox.

Mr. Van Lee, 60 — known as Reggie — has even more work (about 400 pieces) at the homestead he recently rejuvenated in Wharton, Tex., land his great-grandmother, a former slave, purchased in 1899. There, he keeps work by artists like Ed Clark, Romare Bearden, Sam Gilliam and Frank Bowling. 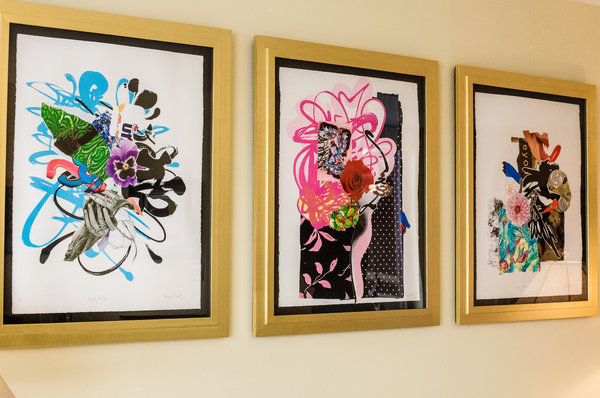 The collector likes to help develop the careers of young artists, as he has done as a trustee at the Studio Museum in Harlem and a former chairman of the Dance Theater of Harlem. Mr. Van Lee, who was a student at Alvin Ailey when he first came to New York in his 20s, has long been a devoted patron of the arts, serving on the boards of Washington Performing Arts, the Kennedy Center and, under President Obama, the Committee on the Arts and the Humanities.

On March 11, the Theater Development Fund will honor him — and the costume designer Bob Mackie — at its annual gala.

Mr. Van Lee became enthusiastic about the organization after attending one of its autism-friendly performances of “The Lion King,” where he spoke with a mother grateful for the chance to bring her son to the theater. She had been asked to leave another show when her son, who has autisim, had became too vocal. This resonated with Mr. Van Lee.

“As a black man in corporate America,” he said recently in an interview, “I’ve been in many rooms where I know I’m not wanted.”

Here are edited excerpts from the conversation.

You have photography by Gordon Parks and James Van Der Zee as well as recent photographs of students at Dance Theater of Harlem.

I have a mixture of established art and people you’ve never really heard of. I think the collection works together.

You own Lisa Beane’s “Little White Lie,” which depicts Thomas Jefferson and Sally Hemings; why don’t you own more political work?

I don’t buy political pieces because I like joy in my life.

What attracted you to an unknown like Tyler Ballon — his religious-themed scenes of African-Americans?

I was blown away. [Gesturing to a large painting over a sofa] This is “The Pietà.” My role in life is to enhance things. I really like to support young artists.

You have a bachelor’s degree and a master’s from the Massachusetts Institute of Technology and an M.B.A. from Harvard Business School; where did the arts come in?

When I was 3, 4 years old, I would draw and paint. In elementary school, I was in the glee club. In high school, I was in speech and drama. The performing arts and visual arts were always something I was very interested in. Pretty early on I discovered I would probably be a better consumer of art and patron of the arts than an artist.

Your mother was a nurse and your father a letter-carrier. How did they influence you?

The notion of aspiring to achieve things in life was sort of in the blood. All things come from somewhere — the notion of surrounding yourself with beauty.

What made you buy the 2006 piece by William T. Williams in your entryway, “Tupelo Honey”?

The musicality of it. Maybe it’s the yellow that attracted me.

Most collectors have more art than wall space. Is that true of you?

I don’t believe in storage. I think art should be seen.