Home » Entertainment » Why Whales and Dolphins Join the Navy, in Russia and the U.S.

Why Whales and Dolphins Join the Navy, in Russia and the U.S.

Fishermen off the northeastern coast of Norway may have spotted the first evidence of a renewed Russian program to use marine mammals for military operations, according to widespread media reports on Tuesday. Last week, local fisherman noticed a beluga whale near their boat that seemed to want their attention. As they got closer, they saw a harness strapped to the beluga, outfitted with mounts for GoPro-type cameras. Further inspection revealed “St. Petersburg equipment” embossed on the harness clips.

Norwegian scientists told reporters that they believed the mammal was trained by the Russian Navy. Russian authorities haven’t commented on the speculation, but it’s unlikely the whale was wearing the harness to record his own home videos.

[For more stories about the experiences and costs of war, sign up for the weekly At War newsletter.]

The use of animals for military operations isn’t all that unusual. During the Cold War, the Soviet navy trained dolphins for military use, but the program was discontinued sometime after 1991. The United States Navy has studied marine mammals, including beluga whales, since the 1960s and has trained them to carry out a variety of tasks, like performing recovery operations and finding underwater mines. The Times reporter John Ismay served as a Navy explosive ordnance disposal officer and explains the kinds of things dolphins, whales and sea lions are trained to do. 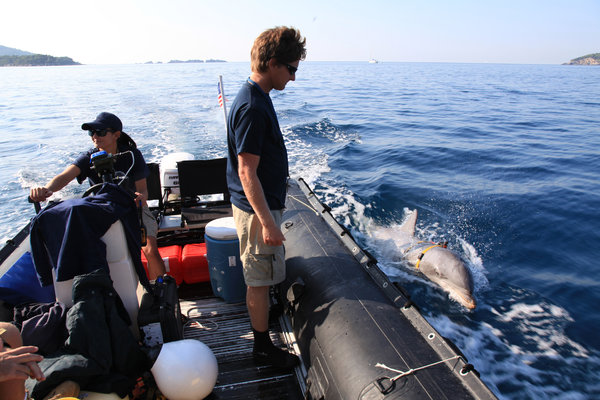 Yes, as strange as it may sound, the Navy uses dolphins for a variety of missions. The Naval Information Warfare Center, Pacific, trains Atlantic bottlenose dolphins on a base in Point Loma, Calif., while the Navy’s explosive ordnance disposal community uses the mammals for many of its operations. During the summer of 1998, before my senior year at the Naval Academy, I was temporarily assigned to an explosive ordnance disposal unit at Naval Amphibious Base Coronado that had several marine mammal detachments. One looked for trained enemy divers, another looked for naval mines floating in the water column and another searched for mines lying on the seafloor. Another detachment trained sea lions to help recover expensive items like inert torpedoes off the seafloor so that the Navy could reuse them.

Two big reasons. One, their bio-sonar is better than any mechanical sonar ever made. Dolphins produce sonar waves from their foreheads, and they can quickly locate things that humans cannot. Second, they can repeatedly dive deeper than human divers, reaching underwater depths that we could otherwise reach only using robots. The dolphins “see” enemy frogmen by sensing sound waves bouncing off the hard calcium deposits in human bones, and can sense mines buried by mud and silt on the seafloor by sensing the air void inside the mine’s casing.

How does the Navy do this?

The dolphins live in netted pens suspended from floating docks near the entrance to San Diego Bay. They are fed a tailored diet of herring and mackerel among several kinds of fish daily. Through positive reinforcement with food and affection, each dolphin is trained to identify specific types of target — such as people, moored mines or bottom mines. When it is time to work, a sailor communicates with the dolphin through a combination of whistles and hand signals. The dolphin then kicks its way up and out of the water, sliding onto a wetted mat laid on the dock. Sailors carry the dolphin to a small motorboat that is cut down to the waterline on one side, which allows the handlers to drive to the search area and slide the mammal gently into the water. They then use a device called a transducer that radiates certain sound tones into the water to signal to the dolphin that it is time to search. Once the dolphin has found its target — either human or a mine — it is brought back into the boat, which then swiftly exits the area so that sailors can take over the mission. For enemy frogmen, that can mean tossing concussion grenades into the water. For mines, bomb disposal divers or remotely operated vehicles go into the water to neutralize or destroy them.

Are they ever trained to kill?

No. That’s a common misunderstanding. You can find rumors all over the internet to the contrary about dolphins being strapped with nuclear warheads for suicide missions, but that has never happened. Their mission is simply to find and mark things, and then exit the area as quickly as possible; there are no weaponized dolphins.

As someone who swam around moored warships as a “target” for the Navy’s dolphins, I can tell you that they are amazingly fast. Enemy swimmers often will not know they’ve been marked until grenades start exploding around them underwater and the dolphins are long gone.

Can you take dolphins on ships?

Absolutely. That summer we loaded the dolphins onto a padded stretcher-like apparatus with cutouts for their pectoral fins. We lowered them into small water-filled tubs, and drove to Naval Air Station North Island nearby. There, we rolled the wheeled tubs onto a C-5 Galaxy cargo plane and flew them to Hickam Air Force Base in Oahu. Sailors and veterinarians tended to the dolphins during the entire flight — continually spraying the exposed tops of their bodies with water so that their skin would not dry out. From there, it was a short drive to the amphibious ship Juneau, where the pools were already inflated and filled with seawater.

By the time we finished work, every place to eat on base had long since closed and we were exhausted. No one had eaten anything since leaving San Diego because the rule was that the dolphins were always fed first. That night I learned a leadership lesson I have never forgotten, though. The commander of the explosive ordnance disposal training unit at Barbers Point was a prior enlisted officer, and he knew that when we were done for the night that we would most likely be tired and starving. He rolled up around midnight in an old fastback Mustang with bags of chips and a case of beer. He could have directed one of his subordinates to take care of us, but he showed up and did it himself.

Are the dolphins friendly?

For the most part, yes. One time, though, a male dolphin named Jake got a little aggressive with me and punched me underwater with his snout hard enough to tear an oblique muscle in my abdomen. After he hit me, Jake “bowed” out of the water (jumping clear of the water and splashing down) all the way back to his pickup boat. I was told it’s a sign of a very happy dolphin. A couple of weeks later, when I went to sick call on the Juneau to get some Motrin for the pain, the Navy doctor did not believe me when I said I was injured by a dolphin and he threatened to write me up. I told him if he didn’t believe me, he should go down to the ship’s well-deck and see the large inflatable pools there — each one had a dolphin in it.

John Ismay is a staff writer who covers armed conflict for The New York Times Magazine. He is based in Washington.

Sign up for our newsletter to get the best of At War delivered to your inbox every week. For more coverage of conflict, visit nytimes.com/atwar.