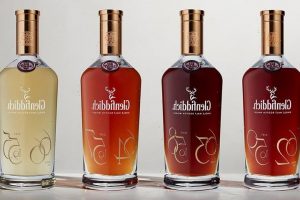 Family-owned Scottish whiskey house William Grant & Sons has just announced a momentous charity auction The Distillers One of One taking place with Sotheby’s at Barnbougle Castle.

With over six generations of whiskey-producing tradition, this auction is looking to raise over £1 million GBP for Scottish charities. Under Grant & Sons Private Clients business, three never-to-be-repeated lots are up for auction — all one-of-a-kind.

A four-decanter prelude set of one-off bottlings from Glenfiddich distilled in the 1950s – some of the oldest reserves in the William Grant & Sons stocks. Nurtured over generations directly by the family and Master Distillers, these expressions from 1955, 1957, 1958, and 1959 are housed in a cabinet fitted with a high precision thermometer and hygrometer from world-renowned instrument makers, Fischer, allowing for careful control of internal environmental conditions. Each liquid is bottled in a Baccarat crystal decanter with a 24-carat gold neck and encased in a cabinet designed and made by HM The Queen’s royal warrant holding cabinet maker, NEJ Stevenson. The cabinet is created using figured sycamore, maple, and hardwood and features an innovative mechanism to lay the whiskies flat to prevent the cork from drying. The cushioning within the cabinet consists of lamb Nappa and goat suede, some of the softest natural materials in existence.

Following the success of the Ladyburn David Bailey Limited Edition in early 2021, this is a unique bottling from “lost” distillery Ladyburn. A 54-year-old whisky distilled in 1966, featuring a highly sought-after hand-signed photograph by David Bailey, one of the greatest contemporary portrait photographers of the modern era, of the icon John Lennon, initially released in 1965 as part of Bailey’s iconic Box of Pin-Ups. Ladyburn was one of the shortest-lived distilleries in history as it only operated for nine years (from 1966 to 1975) with very few casks remaining. It is regarded as a vanguard of its time in knowledge and expertise and the liquid marks an extraordinary moment in the history of Scotch whisky in the 1960s.

This is one of the rarest and oldest expressions of The Balvenie ever to have been made available. For this unique single bottle release of The Balvenie 1964, The Balvenie Malt Master, David C. Stewart MBE, hand-selected this truly exceptional cask – 10379 – distilled on 18 November 1964. It has been maturing in Warehouse 24 for 56 years and has developed a remarkable complexity during this maturation. It is bottled in a one-of-a-kind, hand-blown crystal decanter made by Dartington Crystal and finished with a hand-made calligraphic label by world-renowned illustrator Peter Horridge. The decanter is housed in a black walnut book-opening case created by Morayshire-based furniture craftsman Sam Chinnery. This is packaged in a walnut case with a solid brass stopper and corner bracing made by NEJ Stevenson, holders of HM The Queen’s royal warrant for cabinet making.

Jonathan Driver, Managing Director of William & Grant & Sons’ Global Private Clients, comments, “William Grant & Son’s rich legacy of giving back to its communities comes from the heart and over generations – it is integral to the way we do business. The Distillers One of One is hugely significant because it is the first time that these precious whisky stocks have been made available. These liquids are beyond rare, they are truly ‘one of one’, and their sale is historic as it represents the future legacy held in these liquids.”