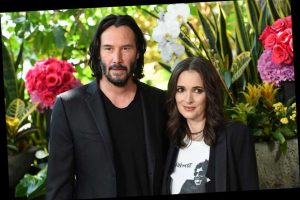 Winona Ryder has shed light on the roots of her lifelong friendship with Keanu Reeves.

In an interview with The Sunday Times, Ryder recounted shooting a scene for the 1992 film “Dracula,” which involved Gary Oldman’s Dracula transforming into a pile of rats. Ryder’s character, Mina Harker, was expected to be shocked and cry. When she had trouble producing enough tears, she said director Francis Ford Coppola, the Oscar-winning director behind “The Godfather” trilogy, repeatedly shouted offensive verbal abuse ― including “You whore!” ― in an effort to elicit tears. He also asked her male co-stars to join in, Ryder said, but Reeves refused to participate.

“To put it in context, I’m supposed to be crying,” Ryder said. “Literally, Richard E. Grant, Anthony Hopkins, Keanu [Reeves]… Francis was trying to get all of them to yell things that would make me cry. But Keanu wouldn’t, Anthony wouldn’t.

“It just didn’t work. I was, like, really? It kind of did the opposite.”

Ryder said the incident led to a long-lasting friendship with Reeves, who played her fiancé, Jonathan Harker, in the film. “Me and Francis are good now,” she noted. A representative of Coppola did not immediately return a request for comment.

And it might not just be their friendship that’s endured since the 1992 movie. Back in 2018, Ryder told Entertainment Weekly she might even technically be married to Reeves after their very authentic on-screen wedding, which was officiated by a real Romanian priest.

“We actually got married in ‘Dracula,’” Ryder said at the time. “No, I swear to God, I think we’re married in real life.”