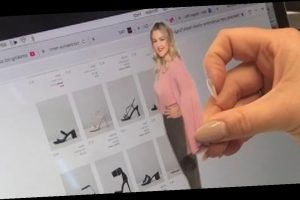 We've all been there, you order a load of different pairs of shoes online, only for them to look completely wrong with your outfit when they arrive.

But it turns out there's actually a very simple way to avoid this – and all you need is a photo of yourself.

The clip shows Megan, who works for the station in Auckland, holding up a small cut out of herself against a computer screen as she scrolls through a selection of shoes.

Megan prints out a photo of her side profile, wearing the outfit she wants the shoes to go with.

The then cuts around her body and snips off her feet, so she can line the end of her legs up with the picture of the shoe on the computer.

She also laminates the photo so she can use it again and again, without it getting bent or destroyed.

Her trick means that she always has an idea of what shoes are going to look like with her clothes before she buys them.

The video was captioned: "Megan's online shoe shopping trick is too good."

One person said that the trick was a "game changer" while another called it "amazing".

"Maybe this will stop me buying s**t," wrote someone else.

"What we need instead of copious orders," added a different person.

Have you got a clever life hack to share? We want to hear from you. Email us at [email protected]

END_OF_DOCUMENT_TOKEN_TO_BE_REPLACED

END_OF_DOCUMENT_TOKEN_TO_BE_REPLACED
We and our partners use cookies on this site to improve our service, perform analytics, personalize advertising, measure advertising performance, and remember website preferences.Ok