Many art careers are made from the top down: A museum show typically provides the seal of approval that propels a young artist to success in the commercial world.

But KAWS — the nom-d’art of Brian Donnelly — took another direction. He became a popular juggernaut thanks to the simple, graphic and recognizable characters he invented — like “Companion,” his version of Mickey Mouse — that riff on famous cartoon figures and have XXs for eyes.

First he sketched them, then he inserted them, illegally, into the sides of phone booths, and soon they became the staples of toys, T-shirts and commercial collaboration of all stripes, giving him 1.9 million followers on Instagram. Mr. Donnelly had a streetwear store in Tokyo, OriginalFake (2006-13), before he ever had a solo museum show.

Only in the last few years has his renown translated into institutional recognition, but it will be 2021 before he finally has his first New York star turn in a survey at the Brooklyn Museum. He’s already earning big auction prices, however, like the $14.8 million paid at Sotheby’s Hong Kong in March for his painting “The KAWS Album” (2005), a mash-up of “The Simpsons” and the cover of “Sgt. Pepper’s Lonely Hearts Club Band.” It was a record for his work — almost 20 times the low estimate — and it stopped many experts in their tracks. 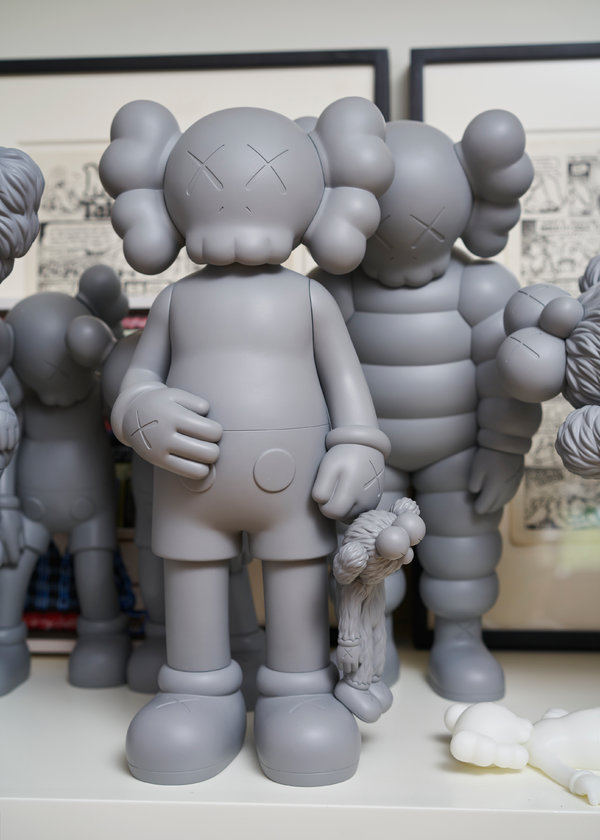 “My trajectory has been from the bottom up,” the 44-year-old artist said last month, sitting in his well-appointed Williamsburg studio, one of two he operates in Brooklyn. And the easygoing artist seemed fine with that.

Mr. Donnelly — a former graffiti tagger who grew up taking the PATH train into the city from his hometown, Jersey City, to hang out at Canal Jeans — created the name KAWS to “live vicariously through the work,” he said, adding, “I don’t feel any need to create attention for myself.”

That may be difficult after this week, when four of his paintings are coming up for bid during the spring evening auction sales, offering his take on the Smurfs, SpongeBob SquarePants and Snoopy.

“His work is universal, and it transcends the traditional market,” argued David Galperin, head of Sotheby’s contemporary art evening auctions in New York. “It bridges fine art and commercial art, and that taps into a global, deep audience.”

Even so, Mr. Galperin added that the March Hong Kong record “surprised all of us.”

Last year was the first time KAWS work was even included in an evening sale at the big houses, showing just how far and fast his reputation has moved.

Mr. Donnelly expressed his feelings about the Hong Kong sale on Instagram: “Do I think my work should sell for this much? No.”

In an interview he noted the obvious — artists don’t see a check from an auction sale unless they consigned the work — but he acknowledged that it adds luster to a career: “I think you’d be kind of naïve to think that it doesn’t affect you in some way.”

Mr. Donnelly does not lack for ambition or activity. He has a just-opened show at the Museum of Contemporary Art Detroit, “KAWS: Alone Again,” on view until August 4. He shows with two prestigious galleries, Perrotin and Skarstedt, and he has an ongoing collaboration called KAWS x Dior, with the French fashion house, involving sculptures for runway shows and store displays. He is surely the only artist working with both Dior and Cookie Monster; his KAWS x Sesame Street collection debuted at Uniqlo in the fall.

Last month, Mr. Donnelly’s studio was full of sharply delineated and brightly colored, abstract paintings in progress — there were no cute characters in these works, but they still bear his deep influence from comics and cartoons. He favors a very thin type of paint, similar to that used for cel animation.

“I’ve always just really liked color,” said Mr. Donnelly of the puzzle-like shapes he was working on. He draws the images and does a first and last paint coat himself, with middle paint layers done by assistants. “You bring in these muted ones and it’s really what gets the others to pop,” he added.

Though paintings may dominate the auction offerings this week, his three-dimensional work has brought him much renown.

At the time of his Hong Kong record sale, Mr. Donnelly had a 121-foot-long inflatable sculpture, “Companion,” floating in the city’s Victoria Harbor. The fourth in a series, organized by the Hong Kong studio AllRightsReserved, will be installed in July at Mount Fuji in Japan.

Michael Rooks, a curator at the High Museum of Art in Atlanta who put on a KAWS show in 2011—12, said that such projects are why “KAWS has had an enormous impact on visual culture across the globe.”

For their part, museums have been traditionally suspicious of things that have too much mass appeal.

“It makes the art world uncomfortable,” said Anne Pasternak, the director of the Brooklyn Museum. “But Brian doesn’t respect those traditional hierarchies.”

Ms. Pasternak took time to come around, too. “I didn’t see the appeal initially,” she said of his work. “But artists love him. They all said, ‘Go visit him. ’And I’ve learned to listen to artists.”

Asked if he still felt unwelcome in the high culture citadel at times, Mr. Donnelly laughed and said, “Yeah, all the time. There’s a sense that you can be a commercial artist or a fine artist, but you cannot do both.”

The visibility of artists like Takashi Murakami, who had a large show at the Brooklyn Museum in 2008, likely helped pave the way.

In featuring Mr. Donnelly’s work, museums are making an explicit play for younger viewers. “KAWS is someone I know is loved by my board members’ grandchildren,” said Elysia Borowy-Reeder, executive director of the Museum of Contemporary Art Detroit. “Millennials and young people are our future supporters and collectors.”

The KAWS characters are sometimes slumped over or have their heads in their hands, and the High’s Mr. Rooks — who sees Mr. Donnelly as a clear heir to Andy Warhol and Roy Lichtenstein in building on pop culture imagery — emphasized the emotional connection that Mr. Donnelly makes.

“There’s no cynicism in his work,” Mr. Rooks said, though he didn’t weigh in on whether the characters could be seen as gentle criticism of old animation tropes. “There’s a level of tenderness that communicates to millennials and emerging generations who have anxiety and existential angst.”

Mr. Donnelly is also an avid collector, and his studio is full of works by Peter Saul, Keith Haring, Jim Nutt and others who have been influenced by animation culture.

“I always visually gravitated toward comics, but I wasn’t somebody who read every story,” he said of his Jersey City childhood, which was much more about finding places to skateboard than see art. “I wasn’t taken to galleries.”

He attended the School of Visual Arts in Manhattan and then started traveling to Japan, further embedding himself in the cartoon aesthetic. In the 1990s the KAWS name became associated with on-the-fly Manhattan street projects.

“I haven’t painted illegally since about 2001,” Mr. Donnelly said. With age came a more conventional life: He’s married to an artist and has two young children.

Given the toys and characters he’s surrounded by at all times, “I had to have kids just to make it not seem weird,” Mr. Donnelly joked.

In a season when he seems to have it all — the fun of childlike pursuits plus serious auction clout and designing stores for Dior — he made no apologies for his low-to-high success. But he did it in his soft-spoken way.

“Honestly to me, it would be weird to be an artist these days and not be working in all these spaces simultaneously,” he said.