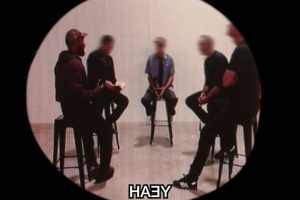 Facing restricted access on Instagram following public backlash, Ye has now delivered a vlog covering recent moments in his life. Titled “LAST WEEK,” the in-depth look into the hectic schedule of the influential creative kicks off with the Grand Theft Auto-inspired YEEZY GAP walk-through of Tokyo we have already seen.

Followed by a scene showing Ye and his crew listening to some of his unreleased music, introducing the candid in-car clips featured throughout the vlog that offer first listens to new tracks he has been working on. Ye is then seen taking a meeting to explore potential developments for YEEZY, once again investigating how to make the classic hoodie better.

After getting a look into his passion for feeding the world through sustainable and innovative means, Ye is seen in what appears to be a meeting with adidas executives. Although faces are blurred, the context of the conversation is revealed by mediators and the obscured figures are wearing shoes marked with the German sportswear company’s Three Stripes branding.

The rest of the video shows Ye speaking to a group about “DONDA-’fying” the Los Angeles YEEZY office and doing an intensive look at garments being worked on by his label. Finishing up the unexpected vlog, we see Ye attending his daughter, North West’s, basketball game.