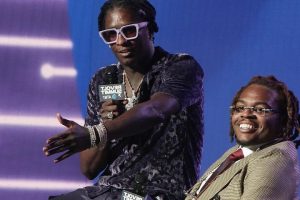 Young Thug was arrested in Atlanta on two separate charges while associates of his Young Stoner Life (YSL) imprint — including Gunna — are facing a 56-count indictment.

According to The Atlanta Journal-Constitution, 30-year-old Thugger, whose real name is Jeffery Lamar Williams, was arrested and booked into Fulton County Jail on charges of “conspiracy to violate the Racketeer Influenced and Corrupt Organizations (RICO) Act and participation in street gang activity.” The RICO Act charge is from an alleged offense committed in January 2013 while the gang charge stems from allegations dating back to May 2018. The Fulton County District Attorney’s Office is yet to release a statement.

In addition to the arrest, Young Thug, Gunna and 26 other YSL associates were listed in a 56-count indictment, with prosecutors stating in the 88-page indictment that “YSL is a criminal street gang that started in late 2012 in the Cleveland Avenue area of ATL. YSL claims affiliation with the national Bloods gang.” It’s alleged that Thugger rented a car in 2014 that was “used in the commission of the murder of Donovan Thomas, Jr., a rival gang member” in 2015, and that two YSL associates, Christian Eppinger and Antonio Sumlin, asked for the label head’s permission to “make a 2nd attempt to murder” YFN Lucci while he is serving time at Fulton County.

Young Thug is set to make his first court appearances on May 10.