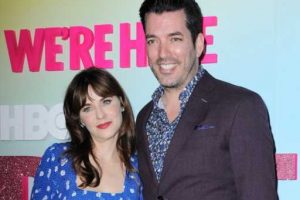 Zooey Deschanel and Property Brother Jonathan Scott are at it again — by being the cutest couple on our Instagram timelines.

On Feb. 27, Deschanel posted an adorable photo of herself and longtime boyfriend Scott to her Instagram with the simple caption, “Sunday…”

Scott quickly commented a heart eye emoji along with three heart emojis under the post — and he isn’t the only one. Deschanel’s comment section is flooded with heart emojis, from fans and former costars alike — including former New Girl co-star Hannah Simone commented a few heart emojis.

In the photo, we see a gorgeous, bare-faced Deschanel in a casual denim button-down and black pants ensemble hugging Scott. Scott is wearing a simple black cardigan and jeans while they both smile for the camera.

Since they confirmed their relationship back in 2019, Deschanel and Scott have been a favorite, simply because of how adorable they are. From simple Instagram interactions that show how silly they are to bare-faced selfies like this, it’s easy to fall in love with these lovebirds.

In an interview with People per TODAY Show, Scott said how in love he is with Deschanel. He said, “I discovered having been in other relationships in the past, this was the very first time I noticed that all the love and effort and the things I was doing were being reciprocated and I was like ‘what?’ So I think I’ll hold on to this one.”

Before you go, click here to see whose net worth is higher in these celebrity couples.