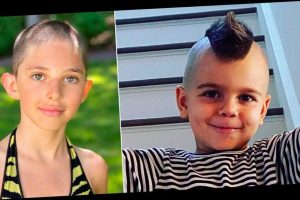 It’s a year of changes and Hollywood’s hottest tot are not exempt! Celebrity kids are changing up their hairstyles in favor of seriously bold, fun new looks.

Back In March Willow Smith shaved her head as part of an L.A. art installation with collaborator Tyler Cole. While this isn’t the first time she buzzed off her hair, this time it carried a lot more meaning. While speaking with her mom Jada Pinkett Smith on their Red Table Talk series a couple weeks later, she revealed that it was an emotionally significant experience.

“I feel like I was just shedding a lot of history and emotional baggage,” Willow explained. “Six, seven years of emotion, I just let it go.”

From Charlize Theron to Jimmy Kimmel, See Stars Getting Makeovers From Their Kids

But possibly one of the most shocking transformations was Alicia Silverstone’s son, Bear, who decided to chop his signature long locks in November. “Yes, It’s true. Bear cut his hair!! My baby’s growing up,” the 44-year-old wrote in an Instagram post on November 22, showcasing the new ‘do. “I miss his hair!!!!! Was it his decision? Yes. Did I cry inside as I watched him get it cut? Maybe… but did I try to stop him? Not for one second.”

A couple months prior to this, the Clueless star defended the 9-year-old after he was being bullied for his strands. “One time my son was made fun of by other kids because of his hair on a bus ride to surf camp,” she explained in an Instagram post in September. “After he had returned and told me, I thought he would want to cut it for a haircut appointment we had already scheduled the next day, but when we showed up, he said, ‘Please give me a trim so I can grow it to my waist.’ That’s my boy! He knows who he is. He loves his hair and chooses to have it long.”

END_OF_DOCUMENT_TOKEN_TO_BE_REPLACED

END_OF_DOCUMENT_TOKEN_TO_BE_REPLACED
We and our partners use cookies on this site to improve our service, perform analytics, personalize advertising, measure advertising performance, and remember website preferences.Ok