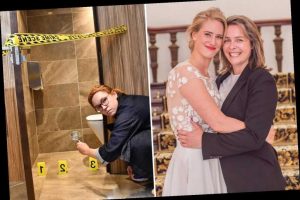 WHEN Karen Whitehouse and Helen McLaughlin got married on a warm summer’s afternoon two years ago, they both expected it to be the best day of their lives.

They’d planned everything to the last detail, from the jazz band and DJ to the delicious nibbles and champagne they’d sourced especially from France. 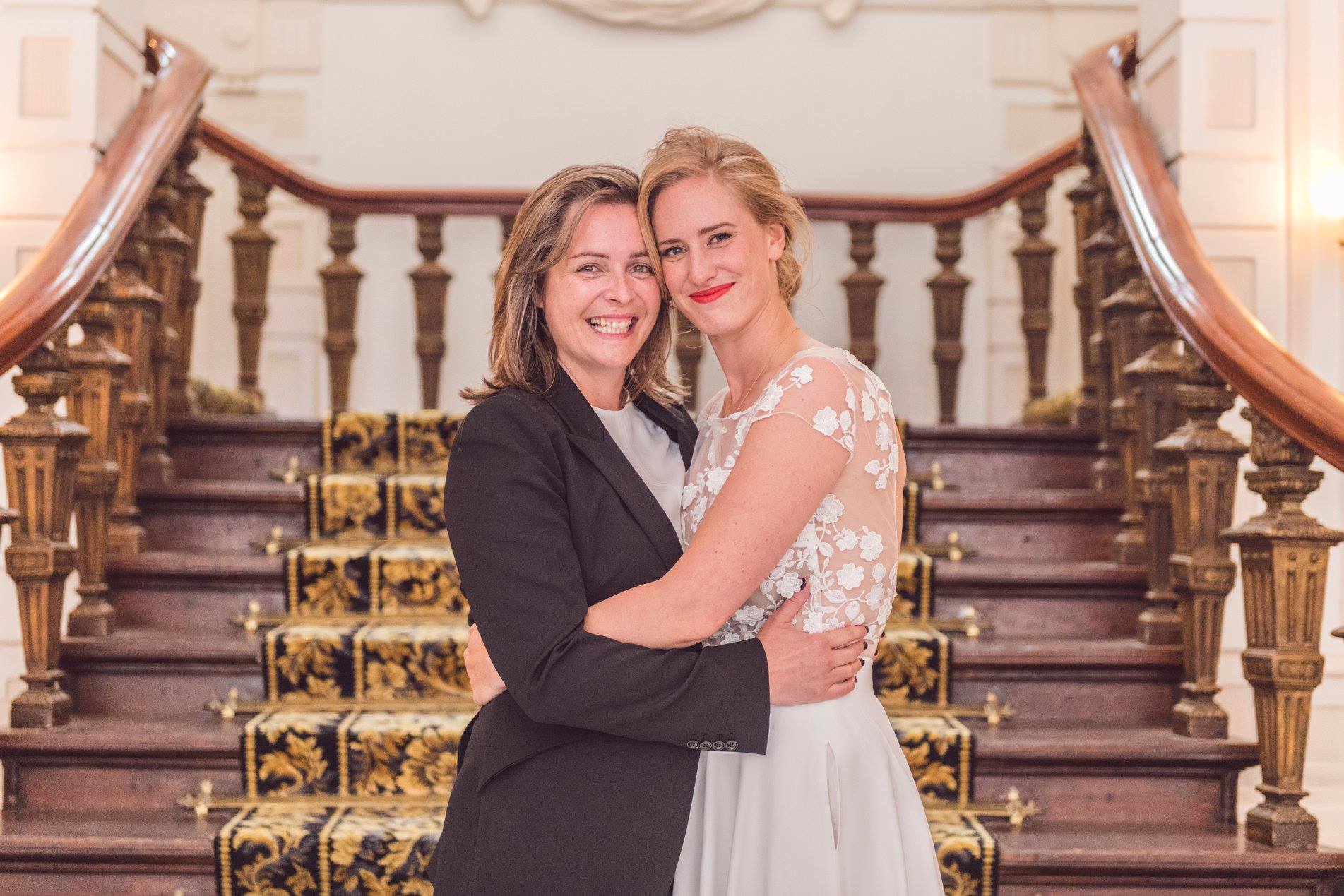 “I would like to say it was an elegant affair,” says Karen. “Or it started that way at least.”

Because around 9.45pm, just as the dancing was started, 34-year-old advertising producer Karen went to the ladies’ bathroom and found a large human poo in the middle of the floor.

“It was such a shock,” she recalls. “It’s not something you ever expect to see in any situation, least of all your own wedding. I knew straight away that someone had done it on purpose.

“We got married on a boat, which is an enclosed crime scene, so we know the perpetrator had to be one of our closest friends or family,” adds wife Helen, 45. 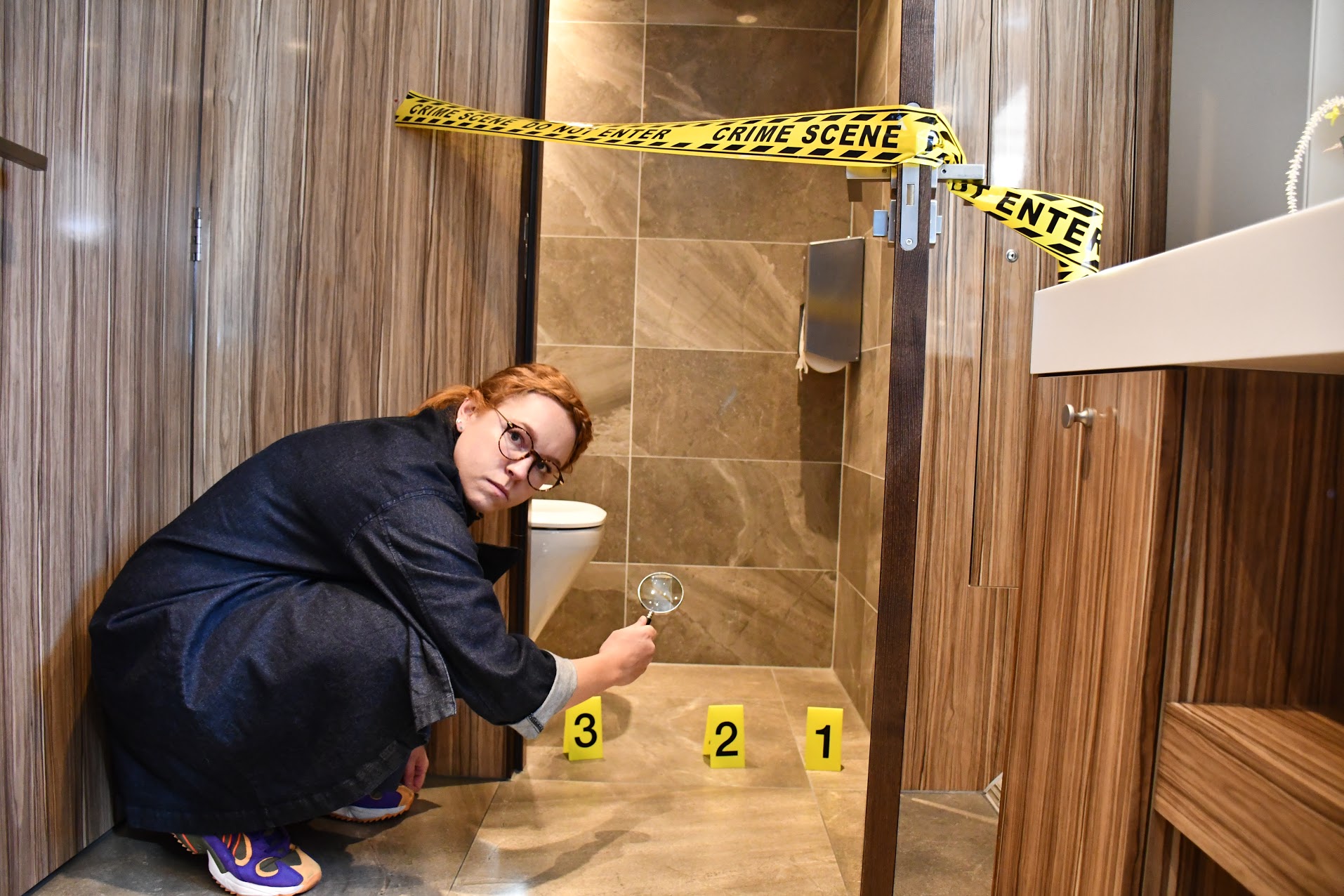 “It makes you look at your nearest and dearest in a whole new light. We both just needed closure.”

And so the stunned brides took it upon themselves to find out who the culprit might be – an epic two-year endeavour that they have now turned into a podcast, Who s**t on the floor at my wedding?

Featuring everything from the brides’ interviews with wedding guests – featuring the help of their best friend-turned-amateur-sleuth Lauren Kilby – to some very game leading forensic experts, it is a tongue-in-cheek ‘’poodunnit’’ unlike any other.

“I think it’s the first of its kind,” says Karen. “And we’re hoping we turned something that was a bit grim at the time into something that will make people laugh after a difficult year.”

Karen and and banker-turned cryptocurrency trader Helen met six and a half years ago when Karen moved from England to Amsterdam, where both now live together.

At the time Karen considered herself straight, but says it was ‘love at first sight’ when she met Helen at a mutual friend’s party.

Two and a half years later, Helen proposed, and the happy couple booked their wedding for August 2018, a two-day affair with a small formal ceremony at an Amsterdam hotel for 20 close family and friends followed the next day with a party on a boat which they had booked to sail through the picturesque countryside north of Amsterdam.

The hundred-strong guest-list included family – including Karen’s sister Anna, who a well-known influencer who as ‘MotherPukka’ has nearly 300,000 followers on Instagram – as well as work colleagues and friends from the UK, Amsterdam and Australia.

“It was quite a mature bunch of people and we knew everyone well,” says Helen. “It was very far from a big fat gypsy wedding affair.” 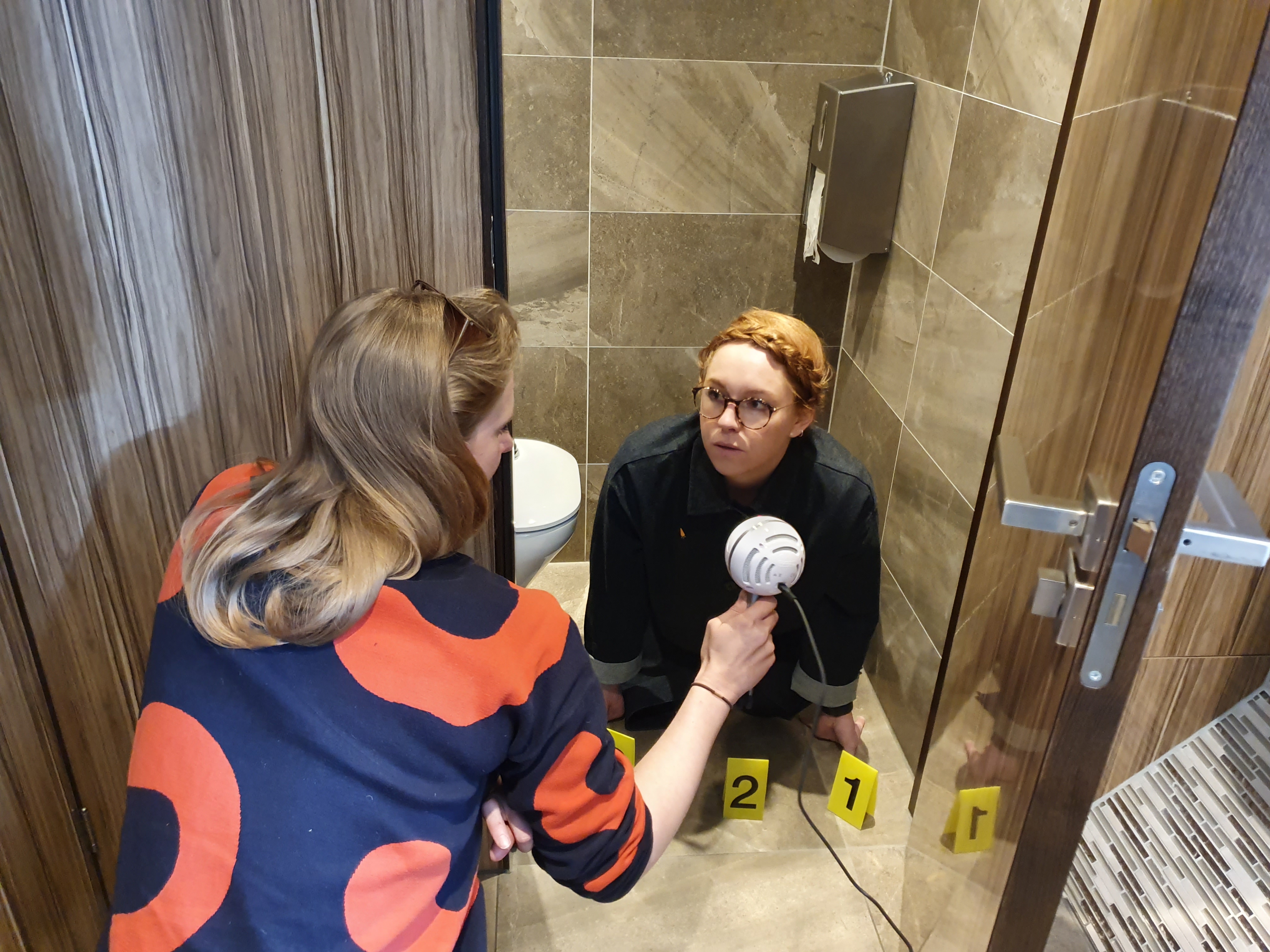 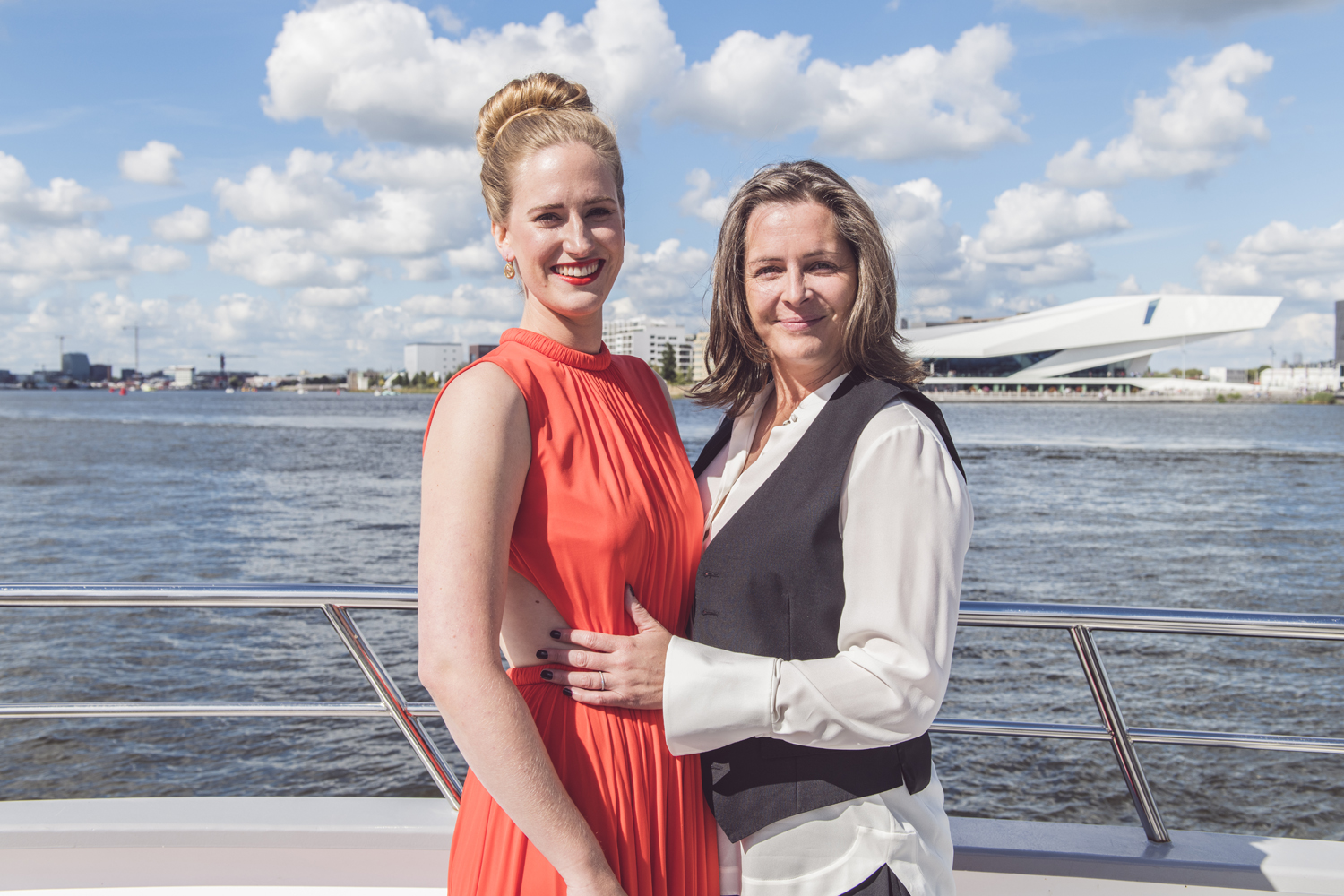 Guests assembled on board from 4pm, joined half an hour later by the brides – Karen in an orange Alexander McQueen dress and Helen in McQueen shirt and trousers – and after a short ceremony they had a champagne reception on the boat’s upper deck before heading to the middle floor for a sit down three course meal.

By 8.45pm it was an open bar with a DJ the girls had flown in from London playing on the top deck.

“Everything was as perfect as we had hoped,” Helen recalls.

“As Karen is a producer, she is used to focusing on the detail, so everything was meticulously planned.”

The party was due to go on into the small hours, but once the dancing had started the boat made a scheduled stop to let older guests and those who needed to return to relieve babysitters depart.

Among them were Karen’s parents, and after saying her goodbyes she went to the ladies.

“Until that point I hadn’t drunk anything to stay focused, but after saying farewell to the older members of the party this was a time for me to let me hair down,” she says. “I was elated”. 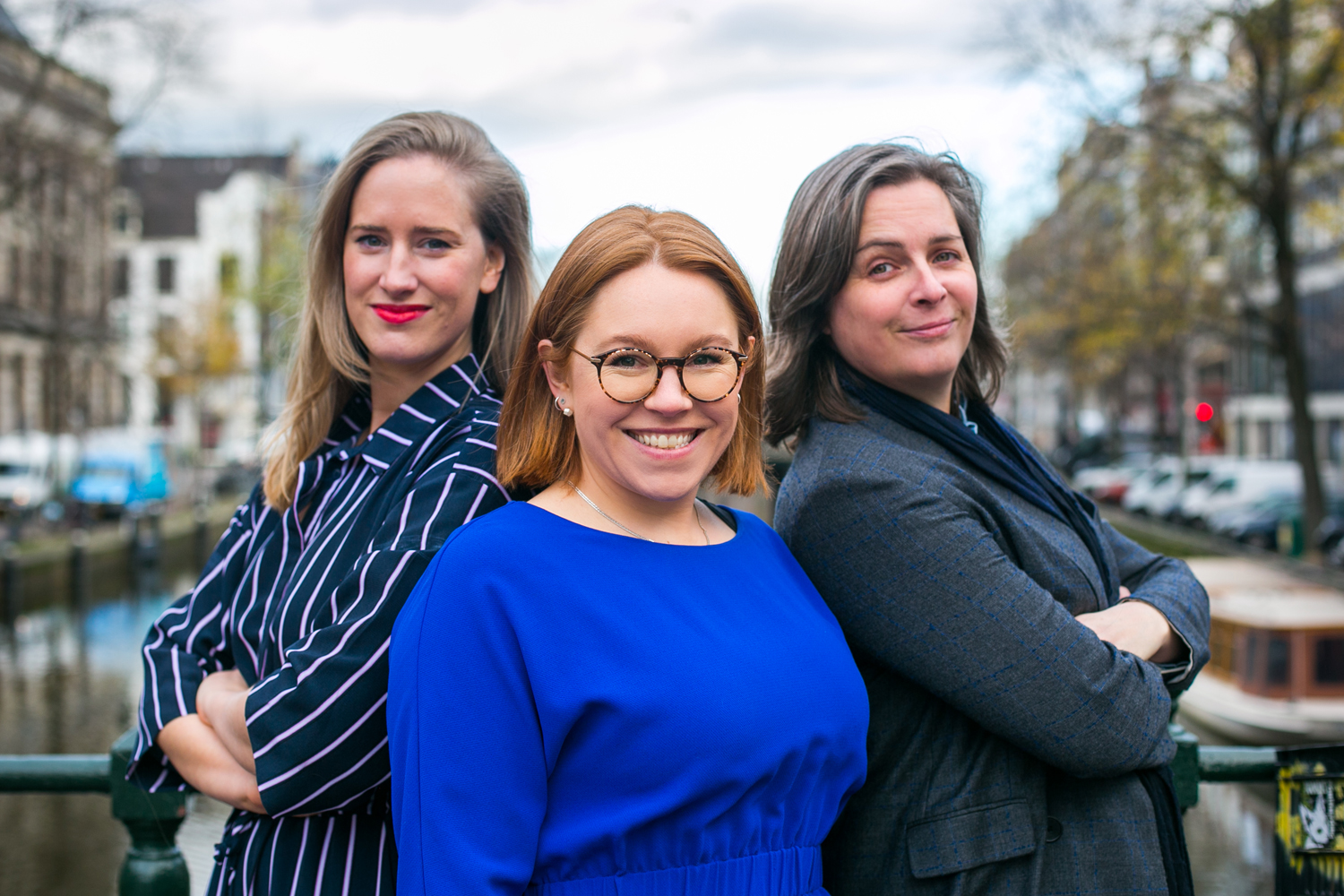 That is, until the moment she walked through the door into the ladies’ bathroom and saw a large turd in the middle of the floor.

“The first thing that struck me was this was done on purpose,” she says.

“It was instinctive. It was so far from a cubicle, right in the middle of the floor. At the same time, I couldn’t get my head round it. I mean, who does that?”

Bizarrely, she recalls a male wedding guest – a mutual friend of both brides – was there at the time looking similarly shocked.

“He was about to clean it up. I don’t think I even said thank you, I just mumbled ‘what the hell is that?’’ went into the cubicle, then washed my hands and left him to it. I just couldn’t deal with it.”

Determined not to ruin the party they had planned for so long, Karen only told Helen about her grisly discovery after the newly-weds returned to their hotel.

“I was determined not to let it ruin this date that we had both worked so hard to plan so I had genuinely forgotten about it at that point – but I realised I had to tell her,” she says. 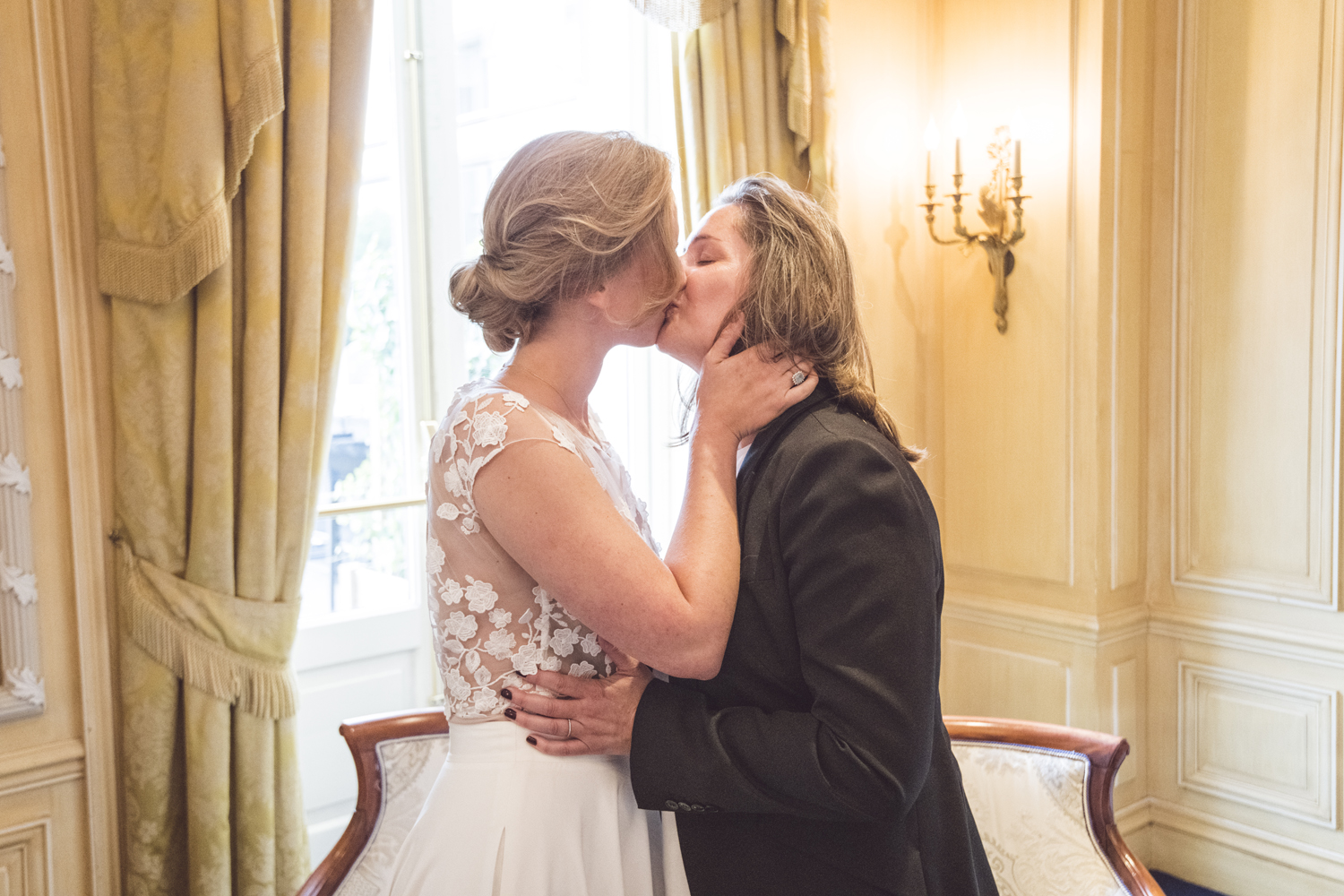 “We then spent two hours of our wedding night talking about it, going through our whole guest list discussing who it could be and why.”

It was a conversation they revisited continually over the coming weeks.

“I mean you just can’t forget something like that,” says Helen. “We kept going through the list of suspects.”

And, as they gradually told wedding guests and other horrified friends, the seeds of the idea for the podcast were sown.

“It started as a bit of a joke, but we realised we were on to something as everyone was so fascinated by it,” says Helen.

“At the same time, we really wanted to know who could have done this. Someone we knew personally and well did this and it does make you look at people in a different way.”

One of the duo’s first port of calls was criminal profiling expert called Professor Mike Berry, a consultant psychologist who has worked on several high-profile investigations including the Moors Murders.

Helen and Karen’s wedding was incredible, but when I started scrutinising I exposed a few cracks

“He told us that if it was loose faeces, it suggests someone might have been anxious, but if it was hard faeces then it’s an indication of somebody who’s angry and bitter about what they’re doing,” says Helen.

“He also told us that the first thing you do in any investigation is start with your dearest as is often an emotional connection to the victim. So, he asked if there were any ex- lovers on the boat – which there were as the last man I dated before I became a lesbian was a guest.”

The girls also managed to pull together a ‘timeline’ courtesy of a photo booth on the boat with a time stamp and similarly date-stamped photos from their official photographer that didn’t make it into their official wedding album and nailed down the time of the offence to somewhere between 9.45 and 10pm.

“We were able to do a degree of mapping from photographic evidence which was helpful,’ confides Karen.

“We even identified one piece of evidence that we were able to send to forensic scientist Jo Millington, who is the UK’s leading blood pattern and bodily fluids analyst.” 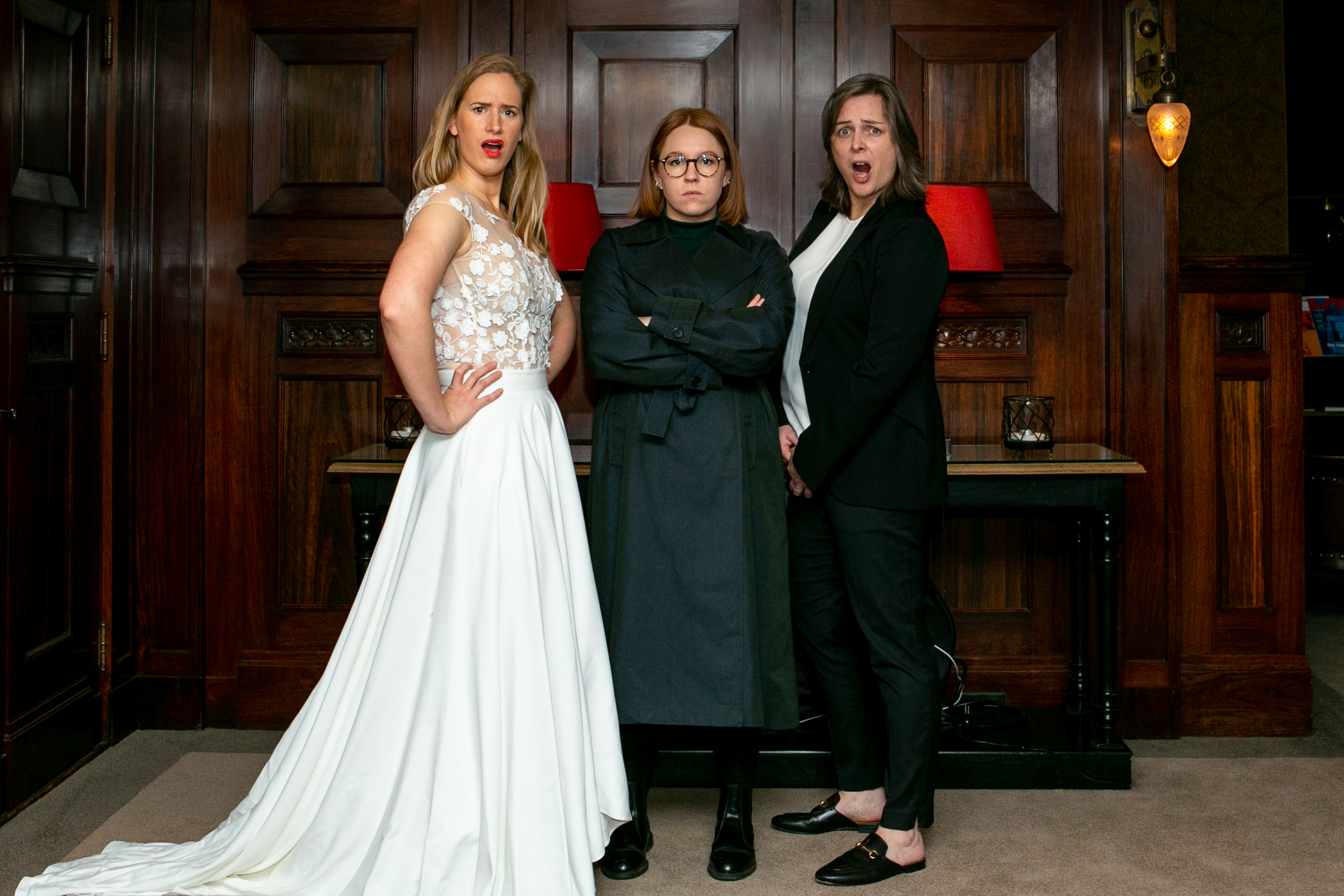 Armed with Mike Berry’s advice – and some clues from the ‘candid camera’ wedding pictures – the pair turned their living room into an ‘interrogation chamber’ and even bought a polygraph test to use on suspects before recruiting the help of wedding guest Lauren Kilby to act as their investigator.

“We realise we needed a little bit of distance from some of the questioning,” says Karen.

It’s a challenge Lauren relished. “No-one was off the hook – including the happy couple,” she says.

“I interviewed a lot of people, everyone from bridesmaids to Karen’s mother.

“I had to explore all avenues, and I kept an open mind. I even considered the possibility that there might be a serial pooper out there who sneaks on to wedding boats, so I kept my ear open for news of other similar crimes.”

Along the way 34-year-old Lauren confides that she uncovered evidence of some ‘weird things’ that happened that night.

“Helen and Karen’s wedding was incredible, but when I started scrutinising I exposed a few cracks,” she says.

“Everything from why there was a man in the ladies bathroom cleaning up the crime scene to some other odd things that you’ll learn on the podcast.”

More than two years on, none of the trio is absolutely certain they have the perpetrator but believe they have narrowed down the ‘suspect pool’ to three or four strong contenders.

“We’ve not got conclusive evidence, but we are definitely getting close and we have around four people we keep coming back to,” says Helen. “And of those, one is a shocker to us.”

Both admit that while they have tried to make something fun out of the bizarre episode, they can still find themselves a bit floored by what happened.

“We’ve gone through a whole gamut of emotion,” says Karen. “Some days I find it quite funny others I am still really quite upset when I think about it.”

Because as Lauren points out, in the long history of bad behaviour at weddings, the peculiar incident at Karen and Helen’s wedding still stands out.

“Right at the start I was doing research on bad things that happened at weddings,” she says.

“It was everything from like bouquets not being caught and landing on the floor to fist fights. I looked through hundreds of articles on the subject – but none of them specified someone sh**ting on the floor.”

In other wedding news, this bride was mocked for glaring error in her wedding pic, but can YOU spot what's wrong?

Elsewhere, a ‘bride’ brutally mocked for booking her wedding DJ TEN YEARS in advance… and before she even has a bloke.

Plus wedding shamers blasted bride for wearing a dress she can’t ‘walk, sit or dance in’.