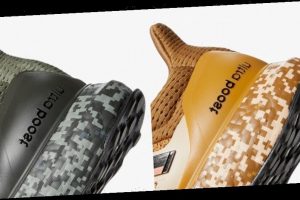 adidas‘ UltraBOOST DNA is a compellingly comfortable contradiction: it’s a shoe designed for casual wear that’s based off of the OG UltraBOOST 1.0, a model that was at the peak of adidas Running performance when it debuted back in 2015. However, the UltraBOOST quickly found favor in the lifestyle market thanks to its pillowy cushioning setup and sleek build — so the DNA leans into that fully with striking colorways and special details, just like the ones seen on this new two-pack of styles equipped with digital camo midsoles.

Arriving in “Raw Desert/Core Black/Pale Nude” and “Legacy Green/Core Black/Legend Earth,” each serves up a military-inspired style. The former uses sandy tan and brown tones and a brown camouflage pattern typically associated with desert warfare, while the latter mixes rich green and olive shades together for a more traditional camouflage palette. Apart from the signature patterns on their full-length BOOST midsoles, both also boast flight jacket-esque blaze orange trim on the Three Stripe midfoot cage plus technical harness details on the tongue and sturdy heel clips with UltraBOOST branding. Continental rubber outsoles round off each style.

Both of these combat-or-chillin’ ready kicks are available now via the adidas webstore, and are priced at $200 USD.