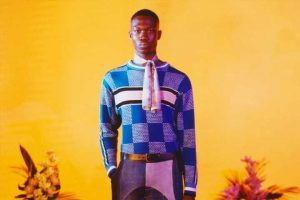 Priya Alhuwalia said she wanted to capture the deeply personal and cultural narratives associated with Black and Brown hair, “as a means of protest, identity and expression,” for her latest spring 2022 lineup.

She went on to translate the rituals and artistry associated with Afro-Caribbean and Indian hair into embroidered badges in the shapes of Afro combs, or curved lines and laser-cut patterns designed to mirror the lines of braids.

Weaving these narratives into her clothing came naturally to the designer, who is of Nigerian-Indian heritage and who has long made a point of “amplifying conversations that aren’t being had in a Eurocentric industry.”

They worked equally well on the knit dresses, miniskirts and draped silk separates that made up her very first women’s wear collection.

For her women’s debut, Ahluwalia wanted to offer more than just some unisex staples: She gave a feminine spin to some signatures, such as printed joggers or tailoring, but also added plenty of new ideas in the form of sexy, body-hugging separates, playful shirtdresses and denim.

”This was a lot more personal. I was thinking what me and my friends would want to wear,” said the designer, who is simultaneously releasing her first line of handbags in partnership with Mulberry as part of the collection launch.

For the collaboration, which is see now, buy now and going on sale today, the designer added her flair for bold colors and patterns on the label’s Portobello tote bags.

It all came together to make for a confident, optimistic first foray into the women’s category — and how could it not be?

Ahluwalia has every reason to be feeling confident about her label’s future: In the last year alone, she has been recognized with a Fashion Award and the Queen Elizabeth II Award for British Design, she has been tapped by Ganni for a collaboration and has just received a 150,000-pound cash prize as part of the British Fashion Council and GQ’s men’s wear fund.