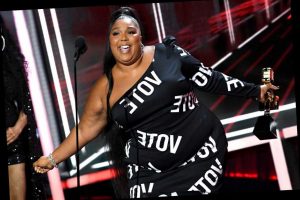 After a few socially-distanced award shows, including the ACM Awards, MTV VMAs and BET Awards, celebrities are really starting to get the hang of red carpet dressing amid a global pandemic — and the Billboard Music Awards on Wednesday night did not disappoint. From politically-charged looks to designer masks, music's biggest stars gave us plenty of exciting fashion moments. On the red carpet, the singer looked “good as hell” in a one-shoulder Christian Siriano “VOTE” dress from his recent Spring 2021 collection, which she paired with a sleek high ponytail and black acrylic nails with the word "VOTE" painted on her ring fingers. Then later that night, the dress made another appearance as the star accepted the Billboard Music Award for top song sales artist while giving an inspiring speech about the power of the people in the upcoming presidential election. Christian Siriano had another major moment on the BBMAs red carpet when Nicole Richie arrived in this sheer flower-covered mesh gown worn over two black undergarments. "The Billboard Awards just got FRE$H," Richie captioned four glam photos of the look on Instagram, which she paired with diamond jewelry by Anita Ko. Fresh off her 20th birthday celebration last week, the TikTok star arrived in a curve-hugging Mugler cutout gown adorned with satin fabric and mesh side panels, paired with Jimmy Choo sandals. (She later took the stage in a Valentino bustier and black silk trousers, paired with a Bulgari diamond necklace.) For her first outfit of the night, the BBMAs host sparkled in a Balmain dress with shoulder pads and fringe sleeves. The wore several other looks throughout the show, including a champagne satin cape gown (also by the French fashion house) and an Alexandre Vauthier crystal-embellished dress with ruching. The music icon looked glamorous as ever in a black mini-skirt and shirt set with sequin embroidery. She styled the look with fishnet tights and ankle strap pumps. The rapper kept things coordinated in an all-black look, wearing a black turtleneck and leather jacket up top, with a black knee-length skirt, high socks and high-shine shoes on the bottom. One of Hollywood's biggest fashion risk-takers did what he does best last night, channeling Little Richard in a wild green and pink Gucci snakeskin suit and orange tinted sunglasses. He rocked retro curls, a thin mustache and matching green nail polish.

END_OF_DOCUMENT_TOKEN_TO_BE_REPLACED

END_OF_DOCUMENT_TOKEN_TO_BE_REPLACED
We and our partners use cookies on this site to improve our service, perform analytics, personalize advertising, measure advertising performance, and remember website preferences.Ok