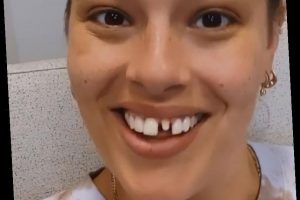 Graham has long been open about the importance she places on body positivity, sharing stories about how she has dealt with criticism in her own past. In fact, she was the first size-16 model to grace the cover of Sports Illustrated's coveted Swimsuit Edition in 2016 and has been celebrated for being a trailblazer of the body-positive movement — but not everyone in the fashion industry was supportive.

"There was another model who was so upset that I had gotten the cover and she said I was very large and that women my size should not be on the cover," the Pretty Big Deal podcast host recalled in an April episode of Naomi Campbell's YouTube livestream series, No Filter with Naomi.

Graham then confirmed that the shady comment came from an older model whose name starts with the letter "C." Though she never revealed her full name, Graham implied that Campbell, 50, would know exactly who she was talking about.

Campbell sweetly told her, "I'll defend you again right now because I don't think that person had the right to say that. It's your time now."