A GROOM has been blasted for holding up a sign at his wedding saying ‘got married on a Friday because Saturdays are for the boys’.

Bizarrely the bride is also holding up part of the placard, and looks on as her new husband and his pals swig booze. 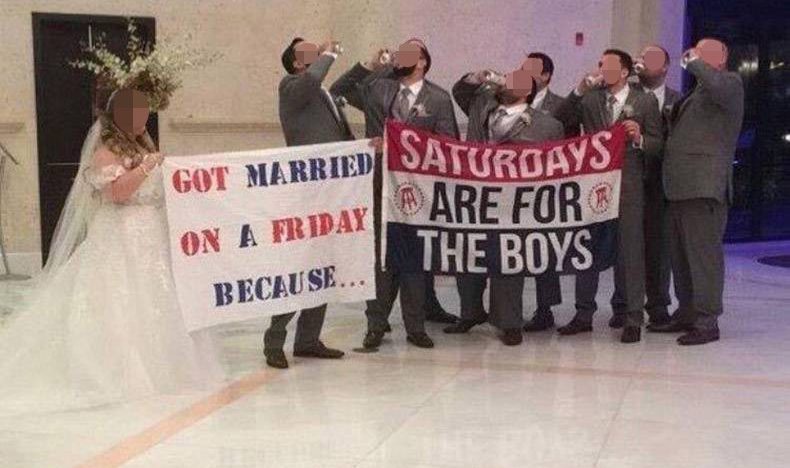 The bonkers photoshoot has been mocked online, with people in shock as to why the bride would take part in the tacky stunt.

The photo was shared online by an unimpressed woman, who said: “I would rather die alone than for this to happen at my wedding.”

The snap has racked up hundreds of comments after it was uploaded to Reddit, where people have branded the stunt ‘cringeworthy’.

One person said: “This reminds me of every single guy I went to high school with. Yikes.” 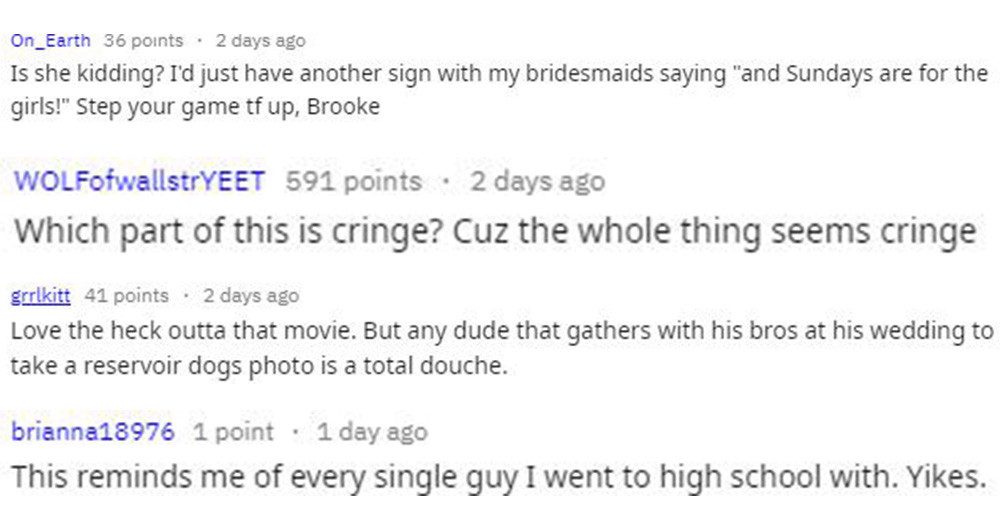 Another wrote: “I bet 'the boys' also had a wedding photo taken of them with sunglasses on posing like they are in the movie reservoir dogs.”

Someone else added: “Saturday's for the boys and Sunday's for divorce.”

While this person pointed out: “Thematically this doesn’t even make sense cause if he got married on a Friday and it would be assumed that this picture was taken on his wedding day then it wouldn’t be for the boys and therefore he wouldn’t be with them.”

Somebody else said: “Which part of this is cringe? Cuz the whole thing seems cringe.”

And this YouTuber shared her horror after realising her wedding dress was completely see-through.

Meanwhile this bride was branded 'trashy' after she insisted guests give her a £120 gift to cover the cost of food.

Plus this bride threatened to 'punch someone' when her fiance organised a hen do in an empty club on Don't Tell The Bride.

Hollyoaks has spoken out after actress Rachel Adedeji said racist incidents had taken place behind the scenes on the Channel 4 soap. The TV star, […]

END_OF_DOCUMENT_TOKEN_TO_BE_REPLACED

Rick and Morty season four finale spoilers follow. Rick and Morty isn’t exactly the most sentimental show in the world. Between those slut dragons and […]

END_OF_DOCUMENT_TOKEN_TO_BE_REPLACED

END_OF_DOCUMENT_TOKEN_TO_BE_REPLACED
We and our partners use cookies on this site to improve our service, perform analytics, personalize advertising, measure advertising performance, and remember website preferences.Ok