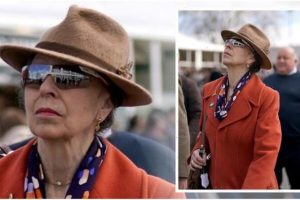 Princess Anne 'is the best of the royal family' says Galloway

Anne accessorised with a pair of gold diamond earrings and a gold chain choker necklace.

The necklace also featured a small silver jewel right in the centre.

As well as this, the Princess Royal is wearing a coffee brown fur hat, with a brown and black feather on its side.

The royal styled her hair in its classic chignon underneath her stylish hat.

Anne then chose to wear her famous gold horse brooch pinned to her coat’s lapel.

She has owned the brooch since the 1980s and has regularly worn the accessory for the races, including Cheltenham Festival and Royal Ascot.

The Princess completed her outfit with a pair of swanky sunglasses that appeared to have an Adidas logo on them with ‘Team GB’ next to it.

Princess Anne is the Patron of Team GB hence why she would have the sunglasses in her possession.

The sunglasses are from the 2012 London Olympics collection.

However, the Princess owns many different varieties of the same Adidas sunglasses.

Some of Anne’s favourite accessories are her Adidas sunglasses collection.

Anne has worn ‘Team GB’ sunglasses from the brand for years and many of her outfits are finished with the Matrix-inspired frames.

The Princess Royal appears to have a few slightly different versions of the eyewear.

But the thing that remains constant is their cutting edge shape and distinctive white arms.

The Queen’s daughter has worn her Adidas sunglasses to multiple Olympic events, races and to occasions casual and more formal.

Another fan, @JayGats44039282 said: “Princess Anne is awesome to an extreme level.