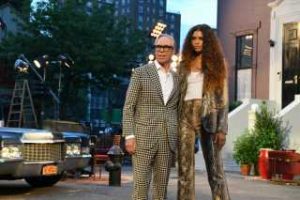 When Tommy Hilfiger started frequenting vintage haunts for cool finds, he thought he was merely sourcing clothes to repurpose for his People’s Place store in Elmira, N.Y. He soon recognized the power of old clothes to inspire, and of an archive to function as an epicenter for design research. In the intervening half century, he hasn’t disposed of a prototype since. Hilfiger talked with WWD about getting started, staying relevant, advice from Karl Lagerfeld, praise for Calvin Klein and why he loves the PVH Archives.

WWD: How do you use the archive?

Tommy Hilfiger: I started collecting vintage spanning back 50 years. I started People’s Place and I used to buy vintage clothes and repurpose them, not because of sustainability at that point, but just because I wanted to make them cool. I would come to New York City and go to the surplus shops, the Army Navy stores, and collect everything from Western to military, Air Force, Army, Navy. I really started collecting surplus at the time.

WWD: You kept what you didn’t sell.

T.H.: Once I was working in New York, whenever we moved our headquarters, we have always had an area for the archives because we use it for design inspiration. The items are too valuable to ever just get rid of.

WWD: How did your thought process move from buying vintage to repurpose and sell to buying it to keep as a source of inspiration?

T.H.: When I started Tommy Hilfiger, we would never throw samples out. We would always keep them, even the protos [prototypes] we would use for fittings. And as time went on, I realized that going back to the past would refresh our minds to what might be coming ahead. I’m sure you remember when we bought Karl Lagerfeld?

WWD: I certainly do.

T.H.: The one thing Karl left me with was something that I will never forget. I asked Karl, “Why is Chanel so successful — what’s your magic?” And he said, “It’s very simple. I go back to the archives of Coco Chanel and bring all of those ideas forward to make them relevant for today.”

WWD: You found it good advice?

T.H.: I took it back to my design team many, many times. Let’s go back to the archive, let’s see what we did in the early days and see how we can make it relevant for today. We did that with Gigi [Hadid]; we did it with bringing back the streetwear of the Nineties. I feel that the archive is one of the most valuable assets we have. It’s like a treasure chest.

WWD: In a piece you did recently with Lisa Lockwood, she asked you what your role is in the company today. You said, “I have an overall idea and I bring it to my team and they realize it.” Do you physically use the archive today yourself?

WWD: The designers on your team visit as well?

T.H.: We have a very large design team in Amsterdam. They visit on a regular basis. But we are, I would say, so organized and OCD about the archive. If you’re one of our designers, you could use your handheld and see every single style and choose something that you may want to use for a future collection, and we’ll ship it out to you.

WWD: Is there a piece or are there a couple of pieces you can cite that trigger particular memories, or that made you think, “Wow! We should reissue this?”

T.H.: Yes, we recently reissued all of the American classics. We redesigned the oxford shirt, the chino trouser, the polo shirt, the golf jacket, the five-pocket Western jean. We reissued all of those in a newer, more modern way but using the inspiration from the authentic originals.

WWD: At the same time there are things that you could never reissue, for example, the racing shirt with the Marlboro logo.

T.H.: We could never reissue that. That was the Ferrari F1 collaboration we did.

WWD: It wasn’t all that long ago, but the world has changed.

T.H.: It really has. We have Navajo sweaters that we would not reissue, but they were very Americana at one point in time.

WWD: What eras do you love?

T.H.: There are sections in the archive of rock ‘n’ roll clothing we did for the Rolling Stones and Lenny Kravitz and David Bowie. And I’m looking at that thinking that was so Seventies-inspired. Every few years the Seventies comes back in a big way.

When we did the Zendaya collection, Zendaya was obsessed with the Seventies. So we brought her into the archive with her stylist, Law Roach, and they went crazy. They loved it, because we’re taking real, authentic inspiration from the Seventies. Obviously, that was my time when I had my stores and when I was selling and designing that type of clothing for cool, young people who were in this hippie era.

WWD: Boring at best, I would say hideous at worst.

WWD: Do you ever go to a room or two over at the PVH Archives and check out the Calvin?

T.H.: Yes, yes. Yes. I have to say, I think Calvin was genius. He was minimal before minimal was minimal. Black, gray, putty, off-white, white and black, gray and gray, but different shades of it, and fits that were appropriate and relevant for the time. Always a step ahead.

WWD: Calvin gets so much credit for being a marketing/advertising master. I don’t think he gets sufficient credit as a ground-breaking designer.

T.H.: He possesses both, the marketing and the design genius. And he will go down in history as one of the greatest American designers that ever lived. Still inspiring young upcoming designers and designers throughout the world.

WWD: That’s so generous of you to say. And accurate.

T.H.: It is accurate. And then, he was genius enough to go into underwear. Think about that. No designer had ever even thought of going into underwear until Calvin decided to go up against Hanes, BVD and classic underwear companies, and you saw what happened — Calvin Klein underwear is the bestselling, most popular underwear in the world.

WWD: Calvin is no longer designing. You’re the house founder going into your own archive. When you see so much of your work in one place, you actually see all that you’ve accomplished, a 35-year success story surrounding you on hanging racks, how does it make you feel?

T.H.: It makes me feel somewhat nostalgic because there is a story behind every item. I remember even sketching out certain items in the beginning, choosing the button, choosing the thread, working with the factory, fitting it on myself. I mean, every single item has a story attached to it. It excites me to walk through and see the different fabrics and colors and details. It takes me directly back to that era and where I was at the time, where we showed it, how we showed it.

I don’t know if you remember the Madison Square Garden fashion show we did at the Madison Square Theater, with Naomi, Kate Moss, Gavin Rossdale of Bush performing. It was real American rodeo, Western wear. When I look at those items with the handmade cowboy boots and the fringe vests and the Western shirts with embroideries, I think a lot of it is like artwork. I mean, these are pieces of art. We worked with authentic Western bootmakers. We studied Roy Rogers and Dale Evans and real inspiration from the Fifties. I don’t even remember the reviews. A lot of times when you’re inspired by something, you really don’t care what the reviews will be if you love it, whether it sells or not. The inspiration it gives to the company and the designers and the creators is priceless.

WWD: I’ve known you a long time, and you present as a humble person. Do you think, wow I’m really proud of myself? You must.

T.H.: I’m really proud we’re still in business doing as well as we’re doing, growing, expanding, still relevant. Because I would say [I’m proudest of] the journey to stay relevant and to stay internally youthful. Because so many businesses become irrelevant as a result of not moving and evolving with the times.