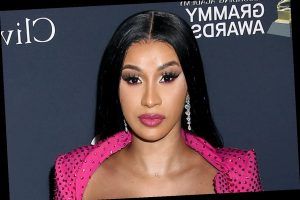 Cardi B is apologizing following accusations of cultural appropriation.

The 28-year-old rapper sparked backlash after appearing on the November cover of Footwear News to promote her upcoming collaboration with Reebok holding a sneaker and seemingly imitating the Hindu goddess Durga (who is traditionally depicted with 8 to 10 arms).

Several people on social media called the cover disrespectful and accused Cardi of "mocking" their culture. “Cardi B did not pay ‘homage’ to the Hindu goddess Durga by holding a shoe in her hand, this is plain disrespect and in no way cultural appreciation," one Twitter user wrote, according to Indian Express. "She can’t get away with this without addressing and apologizing for mocking our culture.” Another added, "Apparently this is Cardi B paying ‘homage’ to the Hindu goddess Durga…This is straight-up racist."

Footwear News said in a statement to PEOPLE on Wednesday: "Yesterday we posted content from our exclusive Cardi B cover shoot. One of the images was intended to pay homage to Hindu goddess Durga, and our intent was to show a powerful woman. However, we realize we were not considerate of certain cultural and religious perspectives and how this could be perceived as deeply offensive."

"We take full accountability for this oversight and we apologize," the outlet continued. "It is important we learn from this example and are sensitive to this sort of religious imagery when creative discussions are taking place in the future. Today, we’re releasing another cover from the shoot that was a subscriber exclusive."

On Wednesday morning, Cardi apologized for any offense she may have caused on her Instagram Story, admitting that she should have researched the concept before the cover shoot.

“When I did the Reebok shoot, the creatives told me I was going to represent a Goddess; that she represents strength, femininity and liberation, and that’s something I love and I’m all about,” she explained. “And though it was dope, if people think I’m offending their culture or their religion I want to say I’m sorry. That was not my intent. I do not like disrespecting nobody’s religion. I wouldn’t like people to offend my religion.

“I wasn’t trying to be disrespectful; maybe I should have done my research. I’m sorry, I can’t change the past, but I will do more research for the future," Cardi concluded.