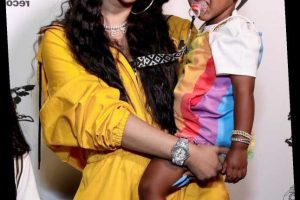 Cardi B’s getting some hurtful comments hurled her way over the explicit lyrics and sexual nature of her songs after her daughter, Kulture, made an unexpected cameo during her recent Instagram Live listening party. The rapper doesn’t let her toddler listen to her more risqué tracks, and that’s her decision alone. Cardi B’s response to haters mommy-shaming her over "WAP" was truly on point, and showed that mothers always know best.

It isn’t the first time Kulture caught Cardi filming a sexy video, and in November 2020 she captioned a post of a similar incident on her Instagram, "I can’t even be sexy in peace." A new video started circulating on Jan. 5, but this time, she ended up facing the wrath of internet critics who thought it was their job to police Cardi’s parenting skills. In it, the rapper caught her tot walking in on her lip-syncing and dancing to her hit song featuring Megan Thee Stallion, "WAP."

"No, no, no," Cardi said when she spotted her daughter in the background. She cut off the track due to its X-rated verses and chorus, just like most parents of young kids would with any inappropriate content. Rapping is her career, and parenting is her life; the two only intersect so fiercely in the public eye, but never at home or around her daughter, especially in the case of a song like "WAP."

Unfortunately, haters on social media spotted the hilarious fiasco as a chance to throw some shade at Cardi’s music and parenting. Things didn’t go well for the hater who started up beef with her, but then again, if you come for Cardi, what else do you expect?

"So [your] daughter can’t listen to it, but everybody else’s daughter can?" one user tweeted criticizing Cardi on Twitter. The rapper took notice of the comment and clapped back swiftly, posting her response to the negativity.

"I’m not [JoJo Siwa]! I don’t make music for kids, I make music for adults," Cardi wrote, pointing out the stark differences between herself and children’s music artists. "Parents are responsible on what their children listen too or see. I’m a very sexual person but not around my child, just like every other parent should be."

Cardi did everything right given the situation; she turned off her tune immediately and stopped what she was doing when she spotted Kulture wandering into the room. Any parent knows accidents happen, and Cardi’s tweet demonstrates it’s a parent’s responsibility to monitor what music their kids listen to on a daily basis, not hers.

She even followed up her original post with a quote tweet, and wrote, "There’s moms who are strippers […] does that mean they do it around their kids? No!"

Cardi concluded her clap-back with a simple message to the haters looking for a chance to attack her parenting skills: "It’s pretty much common sense."

If your kid is listening to an inappropriate song, take notes from Cardi B and just turn it off. And while you’re at it, don’t mommy-shame celebs for doing their best.