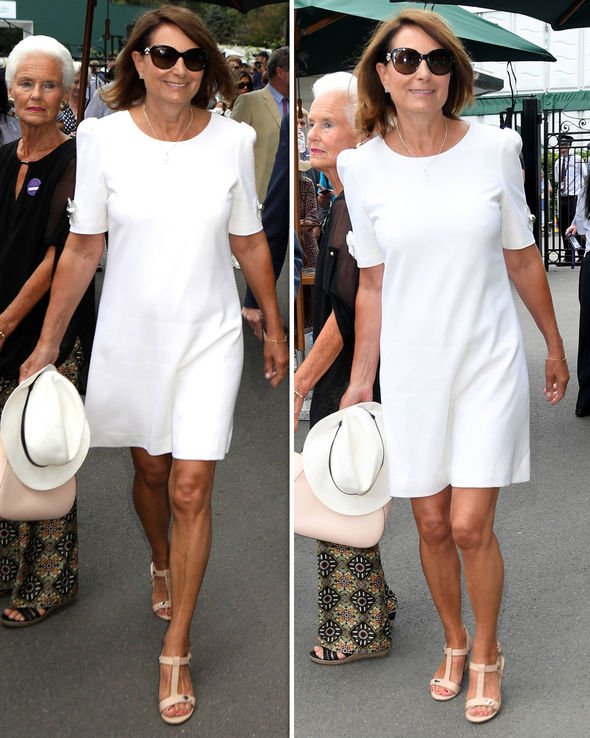 Carole Middleton looked super stylish as she arrived at Wimbledon today for day three of the racing tournament.The former flight attendant – who is mum to the Duchess of Cambridge Kate Middleton- led the style in a white knee length dress, which showed off her tanned legs.The colour white is closely associated with the sport, with the white dress code for tennis players dating back to the 1800s. Carole teamed the A-line number with a pair of nude sandals, which had a subtle stud detail.To keep her eyes shaded from the sun, she wore a pair of big black shades.She completed her look wth a nude bag to match her shoes, some light jewellery and a white hat, which she held in her hand.

Opting for a more natural look, Carole kept her make up light sporting a nude lip as she wore her brunette locks in a soft wave.

Over the years, Carole has been spotted at Wimbledon in some seriously stylish outfits.

The businesswoman – who is also mum to the Duchess’ siblings Pippa Middleton, 35, and James Middleton, 32 – is always impeccably dressed for the annual sporting tournament which takes place during the summer.

She regularly attends matches at the prestigious event, which is thought to be the oldest tennis tournament in the world, with her husband of 19 years Michael Middleton.

Kate’s father, who turned 70 last weekend, frequently wears a suit for the occasion, but it’s Carole’s stylish looks which steal the show. 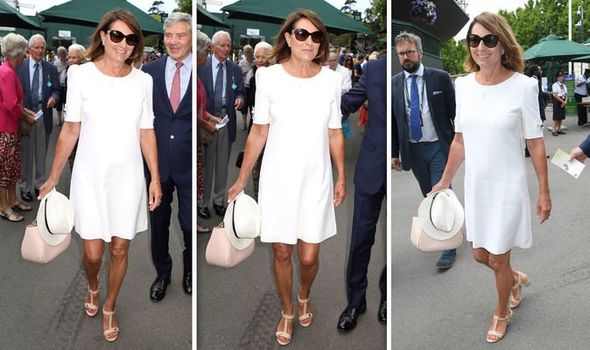 Last year, the mother-of-three opted for a white summery dress with lace trim from high street retailer John Lewis, which she teamed with a pair of nude wedges.

Another stylish look comprised of a blue and white embroidered dress from British label Rumour.

The pretty ensemble was similar to an Alexander McQueen number previously worn by the Duchess of Cambridge, proving that the mother-daughter duo both a have a similar sense of style.

And Carole certainly didn’t disappoint as she arrived at the racing tournament today. 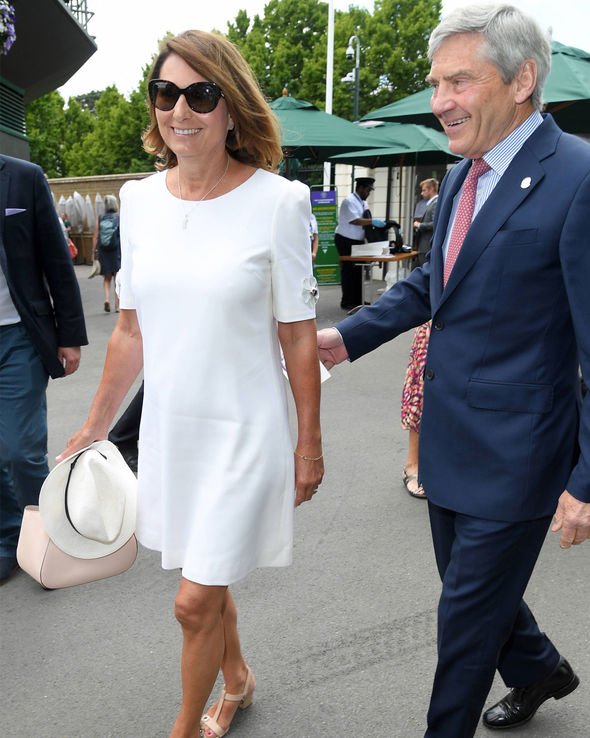 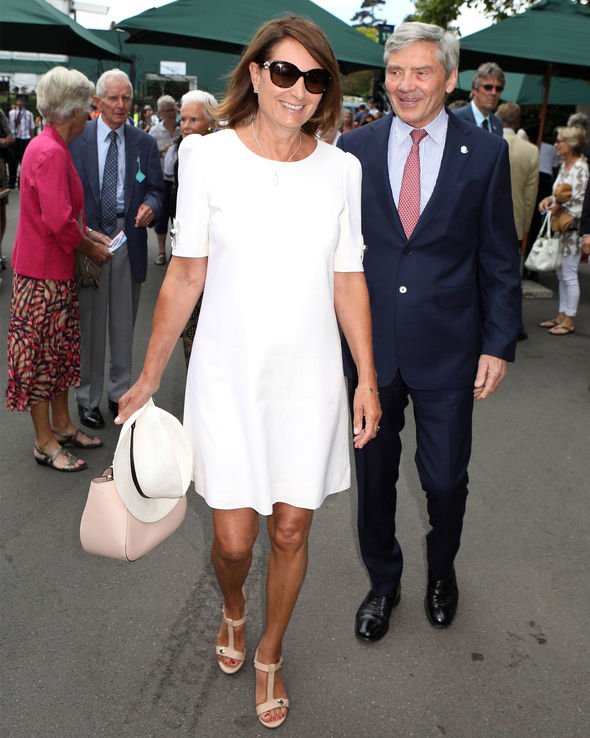 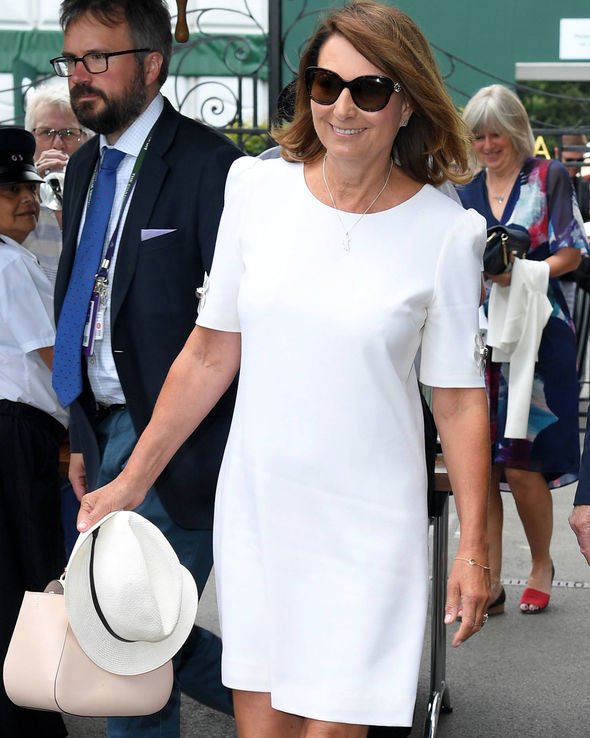 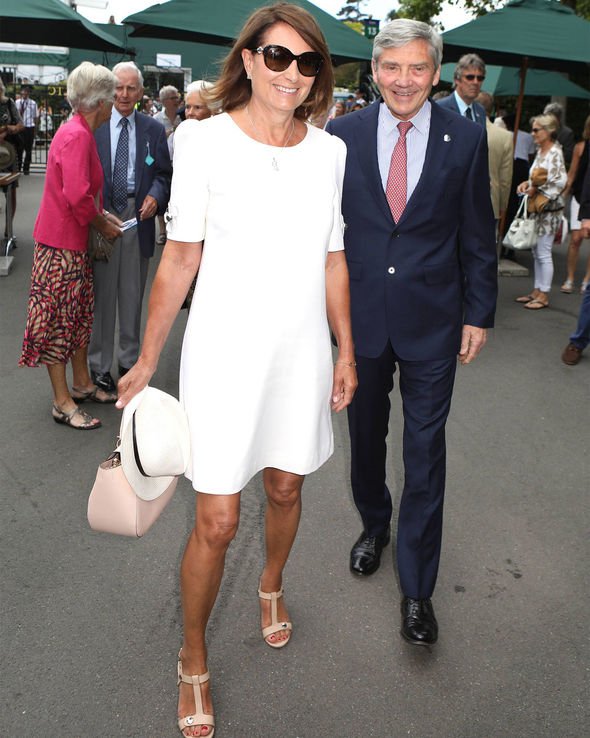 It looked as though the 65-year-old may have taken a leaf out of her daughter Kate’s book, as the Duchess also wore white to the tennis event the day before.

Kate looked impeccable in a white dress as she walked in to the event with tennis officials.

The Duchess of Cambridge made a nod to her surroundings in a classic white summer dress, £1850 by Suzannah – with white being the colour worn by tennis players at tournaments around the world.

Mum-of-three Kate showed off her willowy figure in the dress, white had a classic 1940s silhouette. A black leather belt from Alexander McQueen showed off her trim waist, and she wore a bow pin in the Wimbledon colours on her lapel.

END_OF_DOCUMENT_TOKEN_TO_BE_REPLACED

END_OF_DOCUMENT_TOKEN_TO_BE_REPLACED
We and our partners use cookies on this site to improve our service, perform analytics, personalize advertising, measure advertising performance, and remember website preferences.Ok