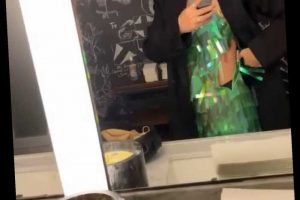 Chrissy Teigen got all dressed up in an iridescent green fringe mini dress for a dinner date with husband John Legend in Beverly Hills on Sunday. And in true Teigen style, she shared all the details behind her look with fans on social media.

The multi-hyphenate star wore a black blazer over the flashy mini, but the jacket wasn't just for aesthetics. The star revealed the wardrobe malfunction she managed to keep hidden throughout the entire meal, all thanks to her styling hack.

When Teigen, 35, took a moment during dinner to go to the restroom, she snapped a video of herself in the mirror while turning to the side to reveal the torn, open zipper on her dress that her blazer concealed. The star placed the blazer back down over the tear and held her finger up to her lips to ask fans to keep her style secret.

The Cravings cookbook author's fashion mishap wasn't even noticeable as she left the restaurant with Legend, 42, who looked dapper in a patterned button-up, black trousers, Gucci loafers and a long camel coat. Teigen's known for keeping things brutally honest with her fans on social media, like detailing her recent attempt at piercing her nose. While on vacation with her family in St. Barts, the mom of two decided to get the facial piercing — but it didn't go exactly as planned.

Captioning a photo of her new nose piercing on Twitter, Teigen said, "So I did this today and it immediately fell out and healed the second she left because she did it wrong lmao."

In a follow-up tweet, she continued, "Like how do you do it wrong? It's a hole, through the nose. It's like jerry seinfeld's bobsledding joke. It's impossible to do wrong."

Later, addressing critics and trolls of her piercing, the mom of two said, "It's out and healed you don't have to keep being a——- thanks I'll do it better next time for you I promise!!" Teigen added in another tweet, "U sweet little angels never cease to surprise me."

She continued to keep fans up-to-date on her nose piercing journey and shared the moment when she finally got the piercing done right.

"I did it. Second time's a charm," Teigen said in the video while showing off her newly blinged-out nose. "Look how cool I am! I am so cool. I love it," she said while tagging celebrity piercer, Brian Keith Thompson of the famous Body Electric tattoo and piercing parlor in Hollywood.